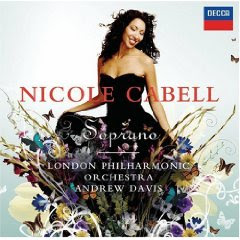 As American soprano Nicole Cabell (born 1977) won the 2005 Cardiff Singer of the World competition, she virtually became famous overnight resulting in a contract with DECCA and her 2007 debut CD simply called Nicole Cabell - soprano. Since then she has been one of the voices-to-watch-out-for and she makes her Metropolitan Opera debut later this month as Pamina (Magic Flute).

As this disc clearly demonstrates, Nicole Cabell´s voice is pleasant enough to listen to, with a dark ring to it. But, at least for the moment, that about covers it. Interpretatively and stylistically, Nicole Cabell is on shallow water. She delivers the tracks and she sings on tune, but offers little in terms of individuality or charm, neither vocally or interpretatively. Filles des Cadiz sounds like Musetta´s Walz and O mio babbino Caro. Lesser known works of Menotti (The old maid and the thief) and Tippet is included as well, and sound just as nice as the other tracks.

Undoubtedly Nicole Cabell intends to display her versatility with this selection. In the end, she mainly displays her willingness to take on various repertoire. However, only 30 years old at the time of this recording, she should be allowed ample space for development, both vocally and interpretatively in forthcoming seasons.

At least, Decca cannot be accused for not pulling out the plugs, as she has been given first-rate accompaniment by Andrew Davis and the London Philharmonic Orchestra.

OMG ! She's taller than Joan Sutherland !!!
Apart from that, what's this with Les Filles de Cadix ? Every debuting soprano seems to be eager to record this song nowadays, but does this mediocre music deserve that much attention ?

You are really a Beckmesser.