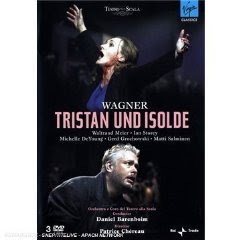 Finally, after a year, this revelatory production, the most successful La Scala season opening in years, has arrived on DVD. I saw it live at La Scala last year, and it remains the highlight of my operagoing experience.

Really, I do not have much to add to my previous description of this simply astonishing production, one of the rare instances of opera truly being more than just a sum of the individual parts. With equal emphasis on the simply outstanding achievements of Patrice Chéreau, Daniel Barenboim and Waltraud Meier.

First, Waltraud Meier is an entirely compelling Isolde. Vocal shortcomings or not (I may add she is on fine form here), she simply inhabits the character of Isolde and the myriads of facets of her superb acting are convincingly transferred to this DVD. I remember how the entire house was paralyzed by the intensity of her liebestod, by far the most moving version I have seen her do. Undoubtedly giants of the past such as Astrid Varnay and the likes could do things with their voice, which Waltraud Meier cannot. However, Waltraud Meier can do things with the character on stage, which those of the past could certainly not.
This is the third DVD featuring Waltraud Meier´s Isolde (preceded by the Müller-Barenboim Bayreuth production and Konwitschny´s Munich staging), and by far the best. Even though Heiner Müller´s Bayreuth production had Daniel Barenboim and a superior Tristan in the shape of Siegfried Jerusalem. But they had no Patrice Chéreau to humanize the drama. In fact, he was asked, but declined. Incidentally, he also declined to stage the 1982 Bayreuth Tristan, which then went to Ponnelle..

Admittedly Patrice Chéreau´s staging is dark and sombre - a ship, a seawall, grey concrete walls encapsuling the drama. Distinguished by his superb personal direction of the singers and thorough analysis of the text, he transmits the emotions unlike any other director I am familiar with. Perhaps with one exception - as Patrice Chéreau has explained, he sees the second act love duet as a philosophical power struggle between Tristan and Isolde, and he may well be right. It would just have been so much more compelling to have it acted out in real.

Also Daniel Barenboim´s third Tristan and Isolde on DVD (he started out with the 1982 Bayreuth Ponnelle production), he more than keeps everything together.The poignancy and engaging interpretation places him high above anyone else both on or off DVD, including his own previous Bayreuth productions, perhaps as a result of this Scala DVD being recorded live.

Best of the rest was Matti Salminen´s dignified King Marke. Ian Storey definitely looks and acts the romantic hero. Vocally his timbre does not appeal to me, but he more than gets away with it. Michelle De Young does to a lesser degree, though she gains from the transfer to DVD. Gerd Grochowski portrays an energetic Kurwenal, vocally perhaps on the dry side.

It this the best Tristan and Isolde DVD on the market? Yes. Without doubt and with a large margin to the next (which in my opinion are Barenboim´s two previous Bayreuth productions, Ponnelle´s and Heiner Müller´s).

Act 1: Isolde´s narration and curse:
Act 1: The love potion - one of the highlights of the production:
Waltraud Meier´s liebestod:
The bottom line (scale of 1-5, 3=average):

At last! I was expecting.
But 3 DVD's is excessive, do you not you think?

Both Opus Arte's Tristans are on 3 discs, one for each act, which generally means higher bit rate. Saying such I will be waiting for this to come out on Blu-ray.

Yippee! Thanks to your blog, I just ordered my DVD from amazon. Thanks!

This might as well be one of the best live Tristan performaces you have experienced. But I would have to disagree abouthe DVDs. The sound recording on this DVD is far too inferior to both Bayreuth Tristans and even the Munich one. This completly prevents me from fully enjoying the music and the performace.
I suppose that your judgment of this being the best Tristan DVD around is based on the impression you've got from the performance itself and not from the DVD

Well- sound recording is one aspects of DVDs I care very little about, or even notice unless someone deliberately points it out. But of course you are right - both Bayreuth recordings (as well as the rest: Glyndebourne, Met and Munich as well) have better sound than this.
Depends on what aspects you value in a DVD. I can live with this sound.
Musically, as I believe I have noted previously, the Heiner Müller-Barenboim Bayreuth DVD is superior to this one (better Tristan and better Brangäne), but as a complete music-drama, this is the best, in my opinion and the one I will return to.
Barenboim is better here too as he always is live (compared to his two Bayreuth-DVDs, which are equivalents of studio recordings), though the Scala band does not play with the same precision as in Bayreuth (or at the Berlin State Opera).

I do agree with you that from the "drama" point of view, this is probably the best Tristan available on DVD. Chereau is a pure genius.
I'm just so distracted and annoyed by the poor sound quality that it prevents me from fully enjoying this great performance, which I would very much like.

Meier's libestod is very disappointing, flat high notes early on, really not a patch on her transcendent performance ten years ago in the Konwitschny version under Mehta. At 52 perhaps her best years are behind her, vocally at least.

I recently purchased this DVD and have had an opportunity to play just a few scenes so far. While far from reference quality, I do not find the audio to be lacking when compared with the Heiner Müller or Glyndebourne DVDs, which I also have. There are options for DTS 5.1 surround or PCM 2.0 stereo. While I preferred the more spacious sound field of DTS, the PCM audio is also adequate.

Regarding Meier's Liebestod, I would have to disagree with DB's comments. I found it both visually and musically compelling - certainly a striking and unforgettable ending to this great opera. Having seen the YouTube clip numerous times, I must say that watching this scene, not to mention the blood flow, on a 100 inch home theater screen packs quite an emotional punch.

Finally, to not care about the audio (or perhaps video) quality on a DVD is sort of like not caring where one sits in the opera house. When a person who always sits in the last row of the balcony finally gets a chance to move down to orchestra center it's like entering a whole new world of opera. As much as possible, all opera lovers should try and recreate this experience in the home. Consider the Aix-en-Provence Die Walküre under the baton of Simon Rattle, which Mostly has reviewed and is now available on Blu-ray. This is the way opera was meant to be viewed and listened to at home. The experience is like being in the opera hall, but at the same time more intimate. It's almost as though one is onstage with the performers completely immersed in the opera and experiencing everything as they do. To watch Wagner in this format on a high-end video system is thrilling, absolutely thrilling.

I agree with DB. When you hear someone sing Isolde properly (like Nina Stemme for instance), you realise that Meier really gets by on her acting of this role.

Well anonymous, personally I find Waltraud Meier´s vocal shortcomings much easier to live with than Nina Stemme´s (whom I heard 4 days ago in the part).

I absolutely understand what you mean, Mostly Opera. It really depends on whether you prefer to hear the music well sung or acted well. I guess we'll need to agree to disagree on this one. I saw the Zurich production with Nina Stemme also - and quite frankly she makes it sound EASY (if that is at all possible). At the end of the La Scala version I actually thought Meier WAS dying vocally.

But different strokes for different folks, as they say!

I do agree that Meier sounds weaker vocally than she did 10 years ago when making the Munich recording. However, having said I do believe that she still probably is one of the most stunning interpreters of Isolde both vocally and dramatically. From the Munich recording (I was in the audience during the performance which was recorded), I do know that the recordings do not do her justice. They don't even come close to capturing the immensity of her vocal performance.

As for Stemme, I suppose it depends on the role she takes, or maybe the night. I haven't heard her as Isolde, so it's hard to judge. e.g. her Senta is very bleak, but her Sieglinde is probably the best around.

Mostly Opera, I thought it might interest you to know that Daniel Barenboim and Patrice Chereau have written a book (sadly only in Italian) about the making of the La Scala Tristan. It is available http://www.lafeltrinelli.it It might be a nice accompaniment to your DVD!

Anonymous - thanks for the tip!