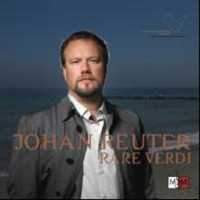 Danish bass-barytone Johan Reuter (born 1969) has been a soloist at the Royal Danish Opera since 1996, important parts including Henrik (Maskarade - on DVD), Rheingold-Wotan (on DVD) as well as a wide variety of bass-barytone repertoire including Mandryka, Don Giovanni, Posa etc.

Lately his voice has been moving in a dramatic direction and his international career has taken off with performances as Wozzeck, The Minotaur as well as Orestes at the London Royal Opera, and Wotan as well as The Flying Dutchman in Berlin. Earlier this season Johan Reuter was about as good a Posa as I ever expect to hear in Copenhagen.

The future seems to include Jochanaan in London as well as Boris Godunov in Copenhagen according to the sleevenotes.

On this, his debut disc, Johan Reuter presents a collection of rare Verdi barytone arias, delivered in splendid, firm voice as well as with excellent sense of style. Relatively straight-forward interpretations, which suit this music well.
Whether the choice of chamber ensemble accompaniement is a good one, obviously depends on the listener. Personally, I don´t think it is. Nevertheless, I´d highly recommend the disc as Johan Reuter seems a man of the future.