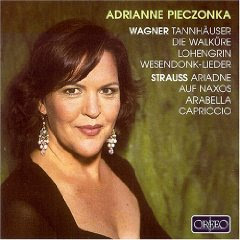 Though she has been around for 20 years (and is Kammersängerin in Vienna with more than 100 performances at the Vienna State Opera), Adrianne Pieczonka´s career sky-rocketed after her performances as Sieglinde in Bayreuth 2006-7, making Sieglinde something of a signature. In truth, Sieglinde may be slightly too heavy for her, and her expression perhaps too restrained, but both in Bayreuth and on this disc (represented with Der Männer Sippe) she is a wonderful Sieglinde. Adrianne Pieczonka´s beautiful floating expressivity also serves Elsa (Lohengrin) extremely well and her rendition of the Wesendonck-lieder on this disc is unusually moving.

However, Adrianne Pieczonka´s true fach is that of a Richard Strauss soprano, reprenseted on this disc by Ariadne auf Naxos (see video below), Arabella and the Capriccio final scene.
Her soaring voice and expressivity in this repertoire is hard to improve on and I must admit to finding her unparallelled today in this repertoire. Hopefully her wonderful Arabella from Vienna and Ariadne from Munich will be released on DVD. The Marschallin is not represented on this disc, perhaps since it is already available on DVD from Salzburg.

Early 2009 her second solo disc of 16 Puccini arias is scheduled for release.