Photo taken during the final applause

The Dresden Parsifal (more info here) in short: This is not a Parsifal production worthy of the Dresden Semperoper. And I am referring mainly to the staging of Theo Adam dated 1988: With a few exceptions it genuinely looks like something from Wagner´s own productions in Bayreuth: Dull and gloomy with the singers basically standing passive on stage and singing to the audience with no interaction apart from the demonic energy Kurt Rydl infused into the scenes with Gurnemanz. No traces of personenregie here.

It seem like this production adheres to most of Wagners stage directions (except that Amfortas in stead of Kundry dies in the end) and thus should be ideal for those adverse to the new tendencies of Regietheater. But I suspect, based on the unenthusiastic applause and sporadic boos, that even more traditionally inclined operagoers were not impressed by this staging, despite the realistic representation of the various symbols such as the Spear and Grail and placing Klingsor on top of a castle build on skulls, shaking in its foundation (not intended) whenever he moved.

In short: It was a long night. As I am opposed to booing, the only thing left was to have some drinks (several needed) during the intermissions. It was still a long night.

On the positive side, Klaus Florian Vogt is fabulously secure and with a beautifully clear voice as Parsifal. I cannot remember the last time I´ve heard this part sung with so much ease. He did not seem strained at any point at all. And, not unimportantly, he is definitely no wimp to look at. There is, however, a certain eeriness to his appearance, which I´ve also noted in other productions, making him dramatically completely unconvincing as an innocent boy. However, the same eeriness suited him quite well as Walther in Bayreuth last year and as Andrei Khovansky (who is in fact a maniacal killer) in Khovanschina last year in Munich. As well as in the Lohengrin production from Baden-Baden (also on DVD). If I met this guy with (or without as a matter of fact) a bow in his hand, I would most likely fear for my life.
However, Kurt Rydl may not have had such concerns since he is probably the most demonic Gurnemanz I´ve yet to see. If I was Parsifal, I would genuinely fear for my life with this guy. Although not quite at ease with the top notes, he was the only of the main characters successfully infusing some life into this production. Whatever you may think of his vocal abilities, he is definitely not boring. Which also goes for Franz Grundheber´s Amfortas – convincingly acted but vocally he was clearly under pressure.

Most dismaying, Katarina Dalayman is just not a good Kundry – she has the kind of regal quality to her singing which may make her a fine Brünnhilde and Isolde – but Kundry is no disengaged Queen: Dalayman does have the top notes, but she is no compelling presence on stage, to put it mildly. The second act scene between her and Parsifal was completely disengaging – both standing on each side of the stage delivering their monologues.

And what happened with the orchestra? I know Peter Schneider as a more than competent conductor in this repertoire, but this was just not good. There was no flow, the music sounded fragmented, it didn´t keep together at all.

Now, this production is 19 years old and is almost revived every year, Semperoper being one of the oldest and most esteemed Wagner houses in the world. It would do the house (and the unsuspecting public) good to have a new Parsifal production. As soon as possible. 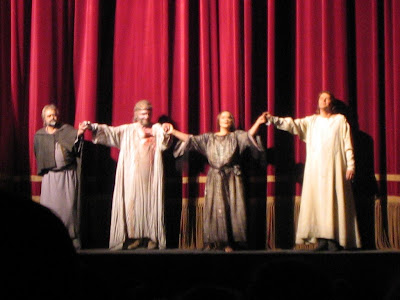 I have to add a comment to your review as I have just returned from Dresden where I saw the Parsifal performance on the 24th. Perhaps the 21st was just an off night because on the 24th it was, by some distance, the finest Parsifal I have seen. It far eclipsed all previous versions I have seen (including Rattle at the ROH and Abbado at the Edinburgh Festival), in the main due to the wonderful playing of the Staatskapelle and the conducting of Schneider (which received a wonderful standing ovation from the audience). Perhaps they just hadn't had enough time to 'mould' an interpretation by the first night? The last act in particular was stunning. The singing was exceptional, especially Rydl (and the stand-in Parsifal was much better than expected after hearing that Vogt was indisposed). For me then, thankfully, not such a long night!

Like 'Anonymous', we too were at the Monday performance in the Semperoper and can only concur with his/her comments! Friday's performance must have been very different from the spectacular and truly uplifting one we experienced - by far the best executed and engaging of the six we have sat through over recent years (including that deeply disappointing Rattle/RoH version (compared to the Proms version) and the wonderful Abaddo/Edinburgh performance). Christian Franz, called in as a late replacement to sing Parsifal, sang commendably well in the circumstances and we have no qualms whatsoever with the quality of the singing or performance of the other soloists. But for us it was the sheer joy of hearing that score played by one of the leading Wagner opera orchestras on this planet - and Schneider certainly contributed to that: he did indeed get that fully deserved ovation as well as the loudest applause on the night (and his players clearly enjoyed their role in the proceedings, given the look on many of their faces in the pit). The production was certainly traditional but having suffered a suspended shark as well as a white handkerchief for a swan and what resembled a meteorite for a grail in other performances, give us tradition every time! And what about the quality of that choral singing? Magical! If this was a 'long night', then we look forward to many more at that wonderful opera house - but please don't tell too many other people!

Thanks for sharing your experiences. Good to hear about the orchestra since I´ve always liked Peter Schneider and I genuinely love the Semperoper. As you mention, the tradition and beauty of the house is indeed exceptional, in my opinion.

I suspect that there may not really have been any rehearsals for the Good Friday performance, though I don´t know. As I mentioned, I was quite surprised at the lack of consistency of Schneiders conducting. He got very little applause that evening.
At least some of the singers obviously were quite busy around that period, with Kurt Rydl singing Gurnemanz in Munich the day before as well, meaning that quality rehearsal time must have been somewhat limited...

Turns out another blogger (link here http://intermezzo.typepad.com/intermezzo/2008/03/parsifal-dresde.html) also was present at the Good Friday performance and had a similar experience to mine. So I suppose it may have been considered some kind of dress rehearsal then....

I would still like to see a new production - by the way where did you see the handkerchief-swan and meteorite grail (I suppose the shark is from Grüber´s London-production, although I haven´t seen it myself).

I attended the ROH Parsifal in December and the swan was represented by a white sheet on a wire. Also the grail at ROH was a lump of rock, which may well be what was alluded to by anonymous. As with the shark, they just did not work.

I know I am late, but I just discovered this blog while looking for reviews of Rene Pape's new CD.

I also attended the performance on 24th and then again on 27. The latter was even better than the one on Easter Monday. Dalayman was replaced by Sarah Maclean (?) who was an excellent Kundry. The soloists were absolutely amazing, the orchestra out of this world. And the production ... hands down, I pray it will be kept for another 20 years. Give me traditional anytime.

"And the production ... hands down, I pray it will be kept for another 20 years."

I haven´t heard anything about a new Parsifal for the Semperoper as of now - unfortunately... :)