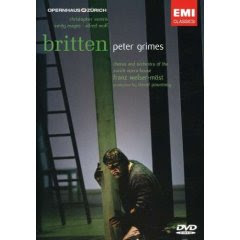 Director David Pountney really does get to the core of Peter Grimes as I see it: Not a drama of the changing of the sea or a specific English fisherman-village portrait, it is rather a universal story of someone being pushed out of a community, for whatever reason we don´t know, and which eventually breaks him. In the unchanging stylish sets, the people of the village are suspended on chairs in the air, literally looking down on, as a metaphor of condemning Peter Grimes. It is a cold world, with everyone looking after himself, even Balstrode plays with the prostitute-girls in Act 3 like the other hypocrites of the village.

Both Christopher Ventris and Emily Magee are exceptionally well-cast as Peter Grimes and Ellen Orford. Ventris brings both sympathy and ambiguity to the character, who is, also from Britten´s hand, ambiguous in his harsh working methods vs. his dreams of simple domestic happiness with Ellen.

And Pountney brings almost biblical pathos to the final scene - Orford and Balstrode sit on each side of the stage with the two dead boys in their lap, while Grimes delivers his monologue leaning toward a white pole (cross).