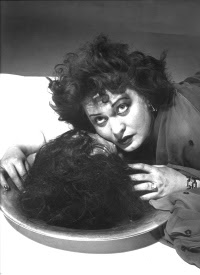 I must admit, that after hearing Ljuba Welitsch as Salome, I hardly listen to anyone else: She has everything, this role requires: A piercingly clear tone with an almost indecent quality as well as an inherent sense of drama. The intensity of her singing is unbelievable.

Ljuba Welitsch (biography here) was born in 1913 and apart from Salome she is best known for her portraits of Donna Anna (also recorded for Furtwängler in Salzburg) and Tosca.

But Salome was her major role, making her debut with it at the Metropolitan Opera in 1949 in a performance now considered legendary and resulting in front-page coverage in the New York Times and a reputation as the worlds leading Salome, which is almost undiminished today. She also sang the role with Richard Strauss himself on the podium for his 80th birthday.

She is, by most, considered the ultimate Salome. The YouTube clip (audio only) of her performing the Salome Final Scene clearly shows why (click here).

For a full recording I highly recommend her 1949 Metropolitan recording conducted by Fritz Reiner, as opposed to the 1951 recording, where signs of vocal decline are already apparent.

Unfortunately her vocal prime was very short, ending before she was 40 years old and by the mid-50´s she started a secondary career in acting. But in her prime, she was glorious indeed.
Posted by mostly opera... at 18:40