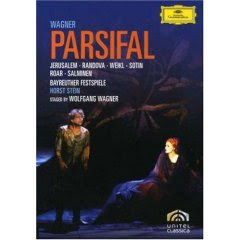 Parsifal is not well represented on DVD and the ideal version is still to appear. The release of this Wolfgang Wagner 1981 production from Bayreuth does not change this, though many may consider it preferable to the alternatives already on the market.

While Wolfgang Wagner does not impress with innovative stagings and brilliant insights into his grandfathers works, nor does he bother anyone, I suppose. This Parsifal production dates from 1975 and was filmed in 1981, the last year of its run in Bayreuth.

The sets are simple and aesthetic with Klingsor and Kundry´s geometrical and colorful clothing contrasting effectively to the bleak background. The temple is grey and austere, the grail is represented by: A grail. However, as always, Wolfgang Wagner does not focus on the dramatic interactions, resulting in a rather static production, which perhaps is more appropriate in Parsifal than in most other Wagner operas and thus creates a neutral background on which the conductor may shine.

Which is, in fact, my major criticism of this DVD: That conductor Horst Stein, while both efficient and competent, does not shine. And as this is quite a conductors opera, it is hard to ignore.

Which is a pity as the singers are very well cast in their respective parts: Best is the young Siegfried Jerusalem as Parsifal. Eva Randova is vocally fine as Kundry, though not overly interesting dramatically intersting. Hans Sotin´s Gurnemanz is solid and both Leif Roar (Klingsor) and Bernd Weikl (Amfortas) deliver well-characterized performances.

I am still waiting for the release of one of Daniel Barenboim´s productions.
Final of Act 2 "Vergeh, unseliges weib" - Siegfried Jerusalem, Eva Randova, Leif Roar: