DVD: Chereau/Boulez with the definitive From The House of The Dead 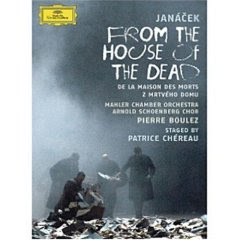 This DVD release of Patrice Chéreau´s superb staging of Janacek´s opera From The House of The Dead, conducted by Pierre Boulez, is one of the very few examples of an opera performance, which I simply cannot imagine being bettered in any way.

This is Janacek´s last opera, premiered in 1930, two years after the composers death. It is based on Russian author Dostojevski´s autobiographical novel of four years spent in a Siberian prison for illegal political activities in the mid-19th century. Janacek almost exclusively used Dostojevski´s test as libretto with the addition of a maximum of 10 paragraphs of his own.

The opera, in short, is about the conditions in the prison, and as such may be viewed as an ensemble piece for male voices. There is no protagonist, and no conventional plot, but we follow the lives of a handful of prisoners, who one at a time tells their life story. The starting point of the opera is the arrival of an aristocratic prisoner (sung by Olaf Bär), who in the end is released, while life for the other prisoners goes on as usual.

Patrice Chéreau and Pierre Boulez received ravishing reviews for this production, including several "opera performance of the year" awards when it opened at the Wiener Festwochen 2007 and it is a co-production with venues such as Wiener Festwochen, Aix-en-Provence and Metropolitan Opera, where it will appear in future seasons.

Patrice Chéreau succeeds in penetrating the layers of this story, showing the multi-faceted aspects of prison life while staying close to the text: The sets are by his usual set designer Richard Peduzzi, creating a gloomy concrete environment alluding any prison anywhere. We see the hierarchy of prisoners, the loneliness and desperation of the individual characters but also the strong sense of brotherhood and unity. Touching, depressing, but also in a weird sense, uplifting.
As usual Chéreau´s trademark is the detailed instruction of the singers, who simply displays superb and moving acting of a quality rarely seen in opera. All were good, but especially John Mark Ainsley and Gerd Grochowski stood out by their convincing portrayal of two of the prisoners. Chéreau has indeed succeeded in bringing this work to another level.

No less impressive is Pierre Boulez bringing out myriads of facets of Janacek´s score with the transparent sense of detail he is so famous for: Never sentimental or sloppy and never less than accurate. He stated that this was the last opera he would conduct, choosing to concentrate on composing in the future. I sincerely hope he changes his mind, as he has done before..

In addition this DVD contains 45 minutes of rehearsal footage and insightful interviews with Chéreau and Boulez.

I cannot imagine any better production of this opera and this DVD is a must for those interested in operatic theater.

Everyone including general impression: 5