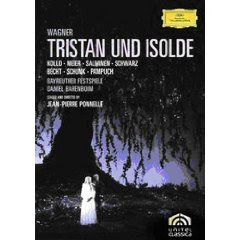 I have always thought, that one of the explanations of Daniel Barenboim´s magnificent reading of Wagner lies in his life-long dedication to Beethoven and Bach´s piano music, which provides him with the essential structure preventing him to get lost in his high intensity dramatic Wagner interpretations. On the other hand, conducting Wagner probably gives Barenboim the opportunity to live out basically every emotion he ever had.

Nowhere is this more obvious than in Tristan and Isolde, where I don´t think he has any rivals in the world today. This is Barenboim´s debut production at the Bayreuth Festival, from 1982, and only the second Tristan production (after the one at Deutsche Oper) he conducted. Already here, the continued tension and shifting heavy string sections which have become part of his trademark are obvious although he has gotten more edge to his interpretation over the years. But a superbly conducted performance, even then.

The director is Jean-Pierre Ponnelle, brought in after Patrice Chéreau declined to stage this production immediately after his Centenary Ring, claiming (understandably) he needed a break.

In many ways this is an ideal fairy-tale staging, the only draw-back in my opinion being a tendency towards the overly static.

In Act 1 we are on board a giant ship, with a fairy-tale Isolde wrapped in a huge white veil. She is sung by Johanna Meier, a fine lyrical singer with a clear and beautiful tone, though a bit more dramatic edge would have served the part well. René Kollo is a bit more lively as Tristan in a convincing interpretation - he is in fine voice as well, and probably only rivalled by Siegfried Jerusalem on DVD. Hanna Schwarz is quite simply a superb Brangäne.

In Act two we are immersed in an immensely beautiful fairy-tale garden with a huge tree branching out light-covered branches covering the entire stage. The production becomes increasingly wrapped in a fairy-tale world, and in Act 3 Tristan lies in front of a naked burned tree withe the shepherd playing his pipe on the black rock beside him. In the only departure from Wagner´s original intentions (for those finding these things important), Tristan dies alone: Isolde´s return from within the tree is only a dream, vanishing with the final chords. Of the remainder of the cast, the young Matti Salminen is a quite superb King Marke.

For many this may well be the preferred DVD version of Tristan and Isolde, though personally I prefer the recently released Chéreau/Barenboim 2007 production from La Scala. Alternatively, the Bayreuth production following this one, also conducted by Barenboim, is possibly of even higher musical quality, though at least equally static.

From the beginning of Act 1:

Anybody know whether there are plans to release Barenboim's La Scala Tristan on DVD?

I suspect they will release it, but I do not know for sure..