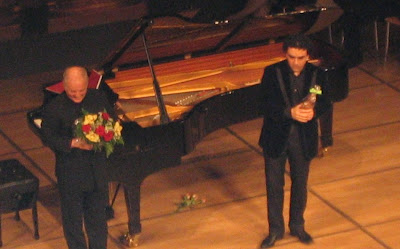 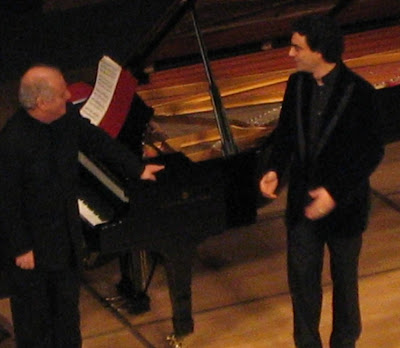 Schumann: Dichterliebe
Duparc: Chanson triste /Lamento/Le manoir de Rosamonde / La vie anterieure
Liszt: Tre Sonetti di Petrarca -1. Pace non trovo 2. Benedetto sia ‘l giorno 3. I vidi in terra angelici costumi
It was obvious to everyone present at Rolando Villazón´s wonderful recital Saturday at the Berlin State Opera, that heis an artist who gives everything to his audience. He literally poured his heart out in this recital programme with songs by Schumann, Duparc and Liszt. There is just such a sympathetic aura around him that you really want him to do well. And on top, Villazon seemed unusually relaxed and calm on stage, as opposed to the hypomaniac presence I´ve seen him exhibit quite a few times in the past. Which was not at least due to the presence of Daniel Barenboim, who was a wonderful accompanist, precise and expressive, but never pushing himself forward. Villazon quite visibly leaned on his solid support the entire evening. Needless to say, the Berlin State Opera was packed, and extra seats had been placed on the podium.

Rolando Villazón is such a sympathetic artist that I genuinely wish I could report that he delivered a perfect recital in every sense and was back with full vocal power. Which, however, wouldn´t be a quite honest note of my impression.

First of all, Villazón was wonderfully expressive throughout the programme, creating infinite colours with the voice alone and with a minimum movement on stage. Regarding expressivity and insightfullness he definitely has never been better.
Vocally, however, there was a thin veil over most of his middle and in particular the high register, where he had trouble with the high pianissimos. He started out carefully with the Dichterliebe and placed more and more weight behind his voice as the evening progressed, but he never quite accomplished an unstrained sound in the top. In particular in the Liszt songs, requiring force in the top register, he didn´t quite have the necessary power.
Does this detract from the enjoyment of this recital? In my opinion, not really. However, I found myself worrying about his upcoming Don Carlos at the Royal Opera more than a few times. He has already cancelled his Cavaradossi in Berlin next season in favour of a Lenski, which seems to be a step in the right direction. It would be a genuine loss to loose an artist of his caliber. 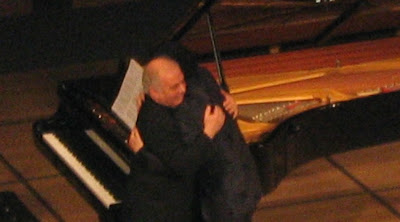 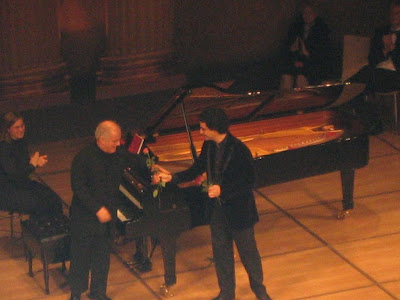 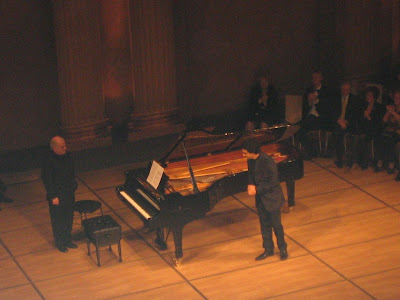 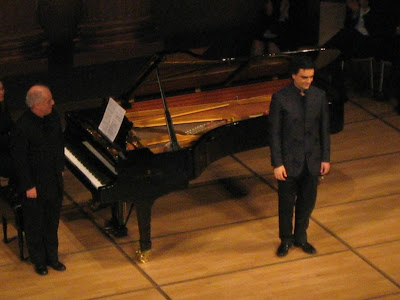 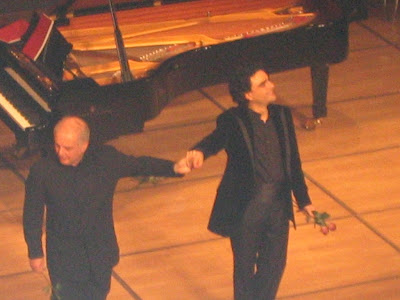 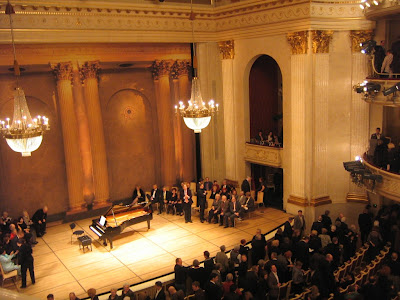 What a fantastic Easter Holiday!

If you have still some time for traveling (to Italy), don't dismiss an event that is going to make history: the first-in-a-life Fidelio from Claudio Abbado!

Tickets - unthinkable! - still available for both performances in Reggio Emilia:

Unfortunately won´t make it down to Reggio Emilia.
Actually, I didn´t realize that Abbado had never done the Fidelio before. That must be quite an exceptional event. Hope it will be broadcast on radio.
And on an unrelated note I hope Abbado will conduct some Wagner again - I know he has done Tristan and Parsifal before, but I have not had the opportunity to hear his interpretations. I suppose I have to accept that he´ll never do a Ring...

Looking at the photos you must have been sitting in the same area of the house as me. This wonderful recital was just part of a memorable Festtage - Barenboim conducting at the Philharmonie, Barenboim duetting with Lang Lang, a great new production of "The Gambler" which showed the Staatsoper ensemble off, and finishing with one of the best Meistersingers of my experience in a wonderfully humane and richly detailed production by Kupfer. Just a magical Easter - a pity the weather was so vile!

I have quoted your aricle about this recital for my blog as I am faithful to Rolando Villazon in my way, I could not thank you because I do not join Facebook .
I hope you will not mind my quote from this beautiful chronicle.
I always read and follow you, and will join you as a follower.
Best wishes.