DVD: Götterdämmerung from "The designer Ring" 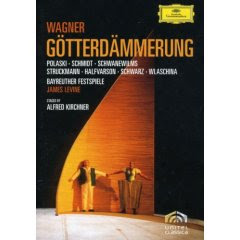 This Götterdämmerung is the only installment of the Kirchner/Rosalie/Levine 1994-8 Bayreuth Ring taped for subsequent DVD release. By some, this Ring is known as "The designer Ring", due to the striking sets and costumes by designer Rosalie, which in many ways make up the most striking aspects of this Ring Cycle.

Kirchner and Rosalie publicly stated a desire to depart from the political Ring productions of previous Bayreuth Ring directors such as Kupfer and Chéreau and free Wagner´s work from all the "ideological and philosophical" ballast. Do they succeed? Well, in a way yes. But what they create instead is an environment reminiscent of a Japanese version of Star Wars, devoid of dramatic interaction between the main characters, who often stand still and just sing to the audience oblivious of the characters the singing supposedly is directed towards.

The sets and costumes of Rosalie very much steal the show - we are on top of the world, literally illustrated as the top of a naked grey globe clearly influenced by Wieland Wagner´s discs of his Ring production of the 1960´s. The Gibichungen´s hall consist of a quadrangular plate balancing on top of that globe - in other scenes the characters walk directly on the globe. A Japanese inspired wall represent the Walkure rock. And all the characters wear quite extravagant costumes looking like mix of Jean-Paul Gaultier and Issey Miyake, which I´d say detracts from the action more than adds to it.

The major point being, however, that Kirchner does not really seem to have a sense of direction of the work. In that respect, it distinctly reminds of the current Bayreuth Ring production by Tankred Dorst, in which the characters also wear odd semi-Japanese Star Wars clothing, as well as being placed in a production with no intrinsic drama. Wagner can be about many things. But in this production, nothing seems to happen underneath the surface.

James Levine´s reading is quite slow and dense, but with seemingly more intensity than his Metropolitan DVD reading. The orchestra sound is above all beautiful as always with Levine´s Wagner, but here it just avoids crossing the line to the smooth (which is not always the case with his Wagner performances at the Metropolitan Opera).

The main stand-out among the singers was clearly Eric Halfvarson´s convincing Hagen - personally I prefer the even more menacing Matti Salminen, but definitely a fine performance from Eric Halfvarson, despite his relatively dry voice (which has become much worse in the last 10 years). Also a good Brünnhilde from Deborah Polaski, which however does not overshadow previous Bayreuth DVD interpreters such as Anne Evans or Dame Gwyneth Jones. Wolfgang Schmidt is somewhat anonymous as Siegfried, which in an odd way seems to fit in with this emotionally detached production.