Richard Jones with Rusalka at the Royal Danish Opera: Above all a musically splenid performance


This new production of Rusalka (more information on the production here) directed by Richard Jones opened this Monday at the Royal Opera, Copenhagen. According to Richard Jones, this opera is about someone (Rusalka) who makes a bad deal (ie. wanting to change the shape of ones body to attain love, which turns out to be impossible), and the opera´s message is rather conservative: You should stay the way you are...Initially he had thought to make a staging based on anorexic supermodels, but ultimately abandoned the idea for this concept in favor of this:

Act 1 - in which Rusalka, dressed as a mermaid in a landshape of plastic-fishes makes the "bad deal" with the which Jezibaba. Gitta-Maria Sjöberg (Rusalka) and Susanne Resmark (Jezibaba) below: 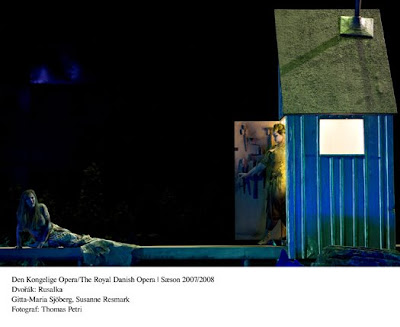 Act 2, which takes place in a closed community of forest workers. We clearly see how Rusalka does not belong here: 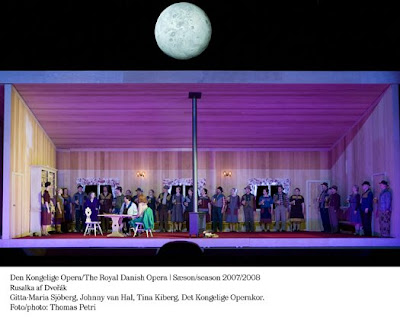 Act 3 takes place in a bar. Jezibaba is the bartender, the water nymphs are prostitutes who seduces and kill the men dropping by. Susanne Resmark (Jezibaba) here seen in the bar: 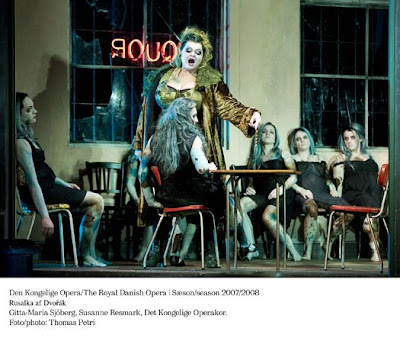 Aesthetically, the staging is quite beautiful. Does it add to the story? Perhaps. But, honestly, I was so focused on the music, that I probably missed several important aspects of the staging (my experience tells me, that I quite often do..).

Above all, musically it was a magnificent performance. Conductor Michael Schønwandt is just brilliant with this repertoire - exposing the textures and details of the score without compromising the drama. The various influences on Dvórak, particularly Wagner, are quite obvious here. I have not heard the orchestra play this brilliant since the superb Elektra production last season. Gitta-Maria Sjöberg is a very fine Rusalka - she has a shaded beauty in her middle register very well suited to Rusalka. And above all Susanne Resmark´s fabulous Jezibaba virtually stole the show whenever she appeared.

This sounds and looks like every other Jones production i.e. ugly and reductive. I would love a company to challenge him to produce a production set in the time/era/location it is set, obeys the composer's instructions and is beautiful and striking to look at. Jones used to do some good work -His INTO THE WOODS is still by far the best version I've seen but it seems he long ago ran out of new ideas.