Berlin Meistersinger revival- in which James Morris was unjustly booed as the Sachs René Pape should have sung... 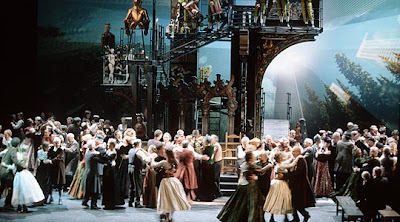 You may or may not like James Morris´ long legato-lines and somewhat passive approach to Hans Sachs, well known from the Metropolitan Opera, on DVD as well. However, in this Meistersinger at the Berlin State Opera he was in excellent voice, much better than in anything I have heard of him from the Met in at least 5 years: No wobble and with a secure, firm tone. Part of the explanation probably being the small size of the house, but I also suspect he may quite simply have been in fine form. In brief, an excellent Hans Sachs with plenty of worldliness and wisdom. And for those reasons, though I fully understand that some may disagree with this assessment, I was genuinely surprised that anyone (luckily only a few, but they were quite loud) would disagree to the extent of booing him. The majority, however, did applaud.

Whenever the subject of Morris´ Sachs came up during the intervals, people kept voicing their disappointment that René Pape had cancelled his originally scheduled Sachs in this production. As well as disliking Morris diction (which I honestly think is quite good) and accusing him of lack of understanding of the character (with which I simply do not agree).

And as regular readers will know well, few bigger admirers of René Pape exist than myself, however since he cancelled this Sachs almost a year ago, even I have managed to get past that disappointment, and accordingly I found the treatment of Morris quite unfair. But then - what do I know? Sachs is a German national icon, and as a non-German, my opinion, of course, counts for very little.
But I´ll have to add that sometimes, some of the operagoing public in Berlin really are among the worst in the world.

Biggest applause among the singers (of course) went to René Pape as Pogner, quite justified, as he was simply excellent.

Excellent also, was Daniel Barenboim on the podium. A magnificent, dense reading of the score. With him, the Berlin Staatskapelle is a first-rate orchestra, and as they played here, they have few (if any) rivals in the world in this repertoire.

Dorothea Röschmann made her debut as Eva, her first lead Wagnerian part, and her background in Mozart-singing was clear from the straigh Mozartian style, which which she approached the notes. Her voice is immensely beautiful, though I sincerely doubt if moving into the Wagnerian repertoire (Elsa is upcoming in 2009) is the right thing, based on the visible strain particularly in the Act III Quintet, where she seemed to have reached the maximum of her vocal capability. Furthermore she looked rather uneasy on stage, though after all, it was her first time with the part.

Among the others, Roman Trekel made a fine Beckmesser. I must admit, I´ve never quite taken to Burkhard Fritz, but that may be blamed on my ears alone, and he did seem better suited to the part of Walther than of other parts in which I´ve seen him previously (Parsifal, Benvenuto Cellini). Katharina Kammerloher was excellent as Magdalene. Florian Hoffman as David simply looked like a teenage-boy and has a very small, lyrical voice. I suppose it is a matter of taste, which type to prefer as David, but I found him a bit out of place here, though not by his fault.

This is one of the least exciting Kupfer-Wagner productions: The theme seems to be the conflict between new and old, illustrated by a vertical column of a wooden structure set upon a background of a projected modern city sky-line. And (very unlikely of Kupfer) the Personenregie seems very weak, leaving us this tableaux with a period-costumed cast for the entire opera. I suppose this production offends very few, but I´d be surprised if many found it innovative or exciting.

The only thing that genuinely bothers me about this Meistersinger, is that the company charges up to 260 Euros (Festival ticket prize) for this old Kupfer-revival, which they have played countless times before at ordinary (up to 80 Euros) prizes. I concede, that this was probably planned around René Pape´s Hans Sachs and that the company had to go forward with the schedule for logistic reasons after he cancelled, but I was not surprised to see so many of the expensive seats empty.

Thank you for a nice blog that I found a couple of months ago. I was surprised to see that you are female - I found that out today. Most hardcore opera fans I know of are male. But of course that does not matter. I noticed with pleasure that we have much in common with our taste in music: Wagner, Strauss, Barenboim, Thielemann, Pape, Meier etc. I am also going to see the Meistersinger and Rosenkavalier in Berlin and Parsifal, Ariadne and Tristan in Wien in the following days.
Looking forward to read your further comments, your notes about Rosenkavalier and Meistersinger in Berlin assured me that I will enjoy the performances.

Thanks for your kind words. I will be in Vienna for the Parsifal but unfortunately have to return before the Tristan and Ariadne performances. Hopefully you´ll drop a note on the Vienna Tristan - I´d be curious what it´s like..

I was at the performance of March 19th, and had very much the same experience as you, except that Morris was not booed, but received possibly the most enthusiastic applause of all. I heard him as Sachs on the Met a year ago, and he was in better voice now, even if his voice has become a bit more "edgy" and less sonourous than in his DVD Wotan. David was an ideal "Lehrbube", but too much of an adolescent to be credible as Magdalenes husband-to-be. Hanno Müller-Brachmanns Kothner was also very good, not least vocally.

I am not too enthusiastric about the production; among other things I do not see the point in making most of the Meistersingers and the Nightwatchman into clowns.

I realise that this a belated comment, but I am going to post it anyhow to repent my sins. No, don't get the idea that I was one of the booers. I share the same feeling with you on the performance. The staging, in spite of not being flawless, commanded respect. I was behind one of the booers and witnessed an unpleasant scene between him and one of the supporters of James Morris. I was flabbergasted, if not astounded, to find that some one had the gall to stand up and boo at James Morris. Then, another fellow supporters of James Morris, perhaps out of righteous anger at the attack, countered it by shouting bravos. The booer, even though he was counted as minority, really made himself heard. This exchange of boos and bravos went on for a few minutes and, believe me, it was an eye-soring scene to watch. At the moment when it happened, I did not know how to react. Now that the dust has settled, I wished I had stood up for James Morris, and had shouted back in reply to the boos to do justice to him.

I know exactly what you mean. I often think after performances that I should have tried to "neutralize" some of these booers as well, but somehow I have never came around to actually do it.
I suppose, some people just take opera too seriously...:)

...Speaking of egregiously belated comments...sorry but I just stumled on here a couple of days ago and will be a regular visitor in future....

Have been a huge Morris fan since I first heard him in Walkure in 1992 (Yikes!!!). The way he poured the tone out in the Leb Wohl is still one of the most astonishing experiences I have had in the opera house. I've heard him in 4 Rings, at least 15 Walkures, 4 or so Meistersingers, Figaro, Don Giovanni, Phillip II, Boris Godunov and a bunch other stuff. I most recently saw him in Walkure this past January and he was in the best voice I've heard from him in at least 4 or 5 years. He could just be going through a good vocal patch. At his age I imagine he must be enjoying it

1) Morris' diction is almost invariably superb in every language I've heard him sing. He did start way to late with his Sachs though. There was a new production at the Met in 1994

2)Pape is schedule to sing Wotan in the new Met Ring and I really think he could be a worthy successor to Morris in his prime. Terfel has been somewhat disappointing as Wotan. Terric per se but I think we could have expected more.

Speaking of Meistersinger, I notice you are viewing the recent DVD (of a nearly a 10 year old performance if I'm not mistaken) of Barenboim at Bayreuth. I'm wondering how it compares to the Levine Met DVD. Both are widescreen which is all I will buy anymore. The Met version would seem to have the stronger cast with Heppner, Matilla and Pape (although as Pogner, not Sachs). Any thoughts yet?

marcillac - Thanks for the comments. Unfortunately I´ve heard rumours that the MET is casting Bryn Terfel as Wotan in the new MET Ring. I really (read: REALLY)hope these rumours are wrong - not casting René Pape as Wotan here will be a disgrace especially since he will probably turn out the best Wotan since Hans Hotter.
Completely agree with you on Morris - he does seem to be in fine voice at the moment.

Gandharva - The MET Meistersinger is, imo, the best of the Schenk Wagner productions and I´d prefer it to Barenboim´s, though I´d take Barenboim over Levine in Wagner any time. The strong points of the MET cast, in my view is René Pape, James Morris and Karita Mattila. Though Morris is not in very good voice here, I still like his portrait of Sachs. And much prefer him to Robert Holl with Barenboim. Wolfgang Wagner´s staging is not too bad - and infinitely better than his previous Meistersinger production...
I am in the process of writing up something on all officially released Wagner opera DVD´s..I will get to these eventually.