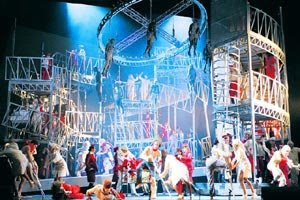 Due to my arrival 3,5 hours before the start of the performance, I got standing room ticket number 11, which secured me a place at the first row of the Japanese-tourist-filled standing room space with the best view in the house for this evenings performance of Forza del Destino at the Vienna State Opera. The heavy Japanese standing room presence at the Vienna State Opera is in fact very positive, since it´s my impression based on several visits, that the Japanese visitors are dead-quiet during the performance as well as polite and observant of the rules which is more than may be said for quite a few others. And many were visibly impressed by the auditorium and surroundings (I even spotted my standing-room neighbor taking a high-resolution picture of her cake and cup of coffee during the intermission – I do agree they serve beautiful cakes here by the way…)

To the point: David Pountney´s stylish new production of La Forza del Destino, which only opened a couple of weeks ago, is based on the idea of coincidences as phenomenons, which make people come together and with unforeseeable consequences. This point was made clear from the beginning of the ouverture with a video projection of a butterfly basking it wings, setting a wheel in motion which finally leads to a bullet, led astray by coincidence and shooting the Marchese di Calatrava so the blood splatters down the screen. This video section is shown several times during the opera on a semi-transparent screen in front of the stage, meaning that even I, for once, got the point without having to read the programme notes…. Furthermore, Pountney sees this opera as a mixture of tragedy and comedy, the comic aspect being the glorification of war present in the scenes with Preziosilla (this I did get from the program notes, however). The main visual element of the production was a declining white wooden platform making it up for the initial as well as last scene. Sets were very simple, only adding a few white constructions on top of the basic ones for the war scenes. Soldiers were dressed up as red-clad cowboys led by Nadia Krasteva (Preziosilla) showing she can do splits as well as sing.

As a courtesy to the two male leads (allowing Alvaro and Carlos a longer break between their two duets) the order of the Act 3 scenes were reversed. Furthermore Guardiano and Marchese Calatrava was sung by the same singer (Alastair Miles), allegedly to imply that both figures act as fathers for Leonora.

I actually find Pountney´s point of coincidences quite good: Does any opera have an equally unlikely course of events? In my opinion, this beats even Trovatore. I mean: Of all the cloisters in medieval Europe, Alvaro chooses to settle at the one where Leonora is living as a hermit in the woods? And of all possible places to duel, Carlos and Alvaro choose the place precisely outside her hut? Not to talk of them running into each other with Alvaro saving Carlos´ life during the war. And I am not even mentioning the bullet issue. But then, on a purely personal level, I met my brother in a completely deserted back alley of Vienna walking back from a Parsifal performance last spring – and none of us even knew that the other was going to be in Vienna at all. How likely is that? The point being: Coincidences do happen….

Unfortunately I feel that Nina Stemme´s voice is currently developing in a unfortunate direction: During the last couple of years it has become increasingly strained, and as tonight's Leonora she displayed a quite obtrusive wobble in her middle as well as high register. It is genuinely a shame, since she has such other fine qualities, such as the ability to generate vocal drama and a convincing stage presence. But she was warmly received by the audience. Nadia Krasteva, despite looking really good and doing some awesome splits, didn´t seem completely at ease with Preziosilla either. Alastair Miles was a rather dry-voiced Guardiano/Marchese di Calatrava. On the positive side, the male leads did really well: Salvatore Licitra was light-years better than in the miserable Ballo di Maschera-broadcast this January from the MET: He both sang and acted convincingly and with plenty of warmth. And perhaps the biggest applause of the evening well-deserved went to Carlos Alvarez as a vocally secure and dramatically convincing Carlos.

Now to the Vienna State Opera Orchestra: I simply don´t think they played up to their best. Zubin Mehta obviously took a lighter, less fluently approach to the score, but even then the orchestral sound at several points sounded just shallow and forced…

In the monthly Vienna State Opera magazine, Zubin Mehta talked about the superstition associated with Forza del Destino and was quoted as saying that Pavarotti didn´t even allowed him to play the Forza ouverture in their concerts together for superstitious fears of evil, not the least since this is the opera on which baryton Leonard Warren died on stage at the Metropolitan Opera. Both Pountney and Mehta stated that they did not believe in fate.
Posted by mostly opera... at 12:52