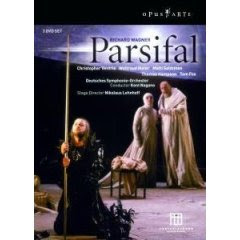 Director Nikolaus Lehnhoff, a former assistant to Wieland Wagner, presents a both fascinating and original interpretation of Parsifal: We are in a post-apocalyptic world. Living within bare concrete walls, pierced at one point by a meteorite, the "Knights of the Holy Grail" symbolizes a closed (religious?) community - originally perhaps intending to do good, but now rotten to the core. They do not venture into the sun outside, where creatures like Kundry (a feathered bird) and Parsifal (sun-burned in ragged clothes) come from. In fact, the outside sun here serves as symbol of the Holy Grail.

Personally, I imagine these Grail Knights to represent a closed community surviving in a post-atomic wasteland, where venturing outside equals dangerous exposure to the sun due to the diminished size of the ozone layer. In this context, it makes sense that the shell-clad Titurel (old enough to have been outside) appears from beneath the ground to implore the small community of survivors to reveal the Sun. Many interpretations are possible, I suppose.
Where exactly Klingsor fits into this picture, I am not sure: He appears within the bone structure of a human pelvis, indicating a metaphysical as opposed to real presence. Subsequently the Kundry-bird gradually sheds a giant shell to seduce Parsifal, who in the end has a real fight with Klingsor involving a real wooden spear. In Act 3 we are back in the concrete wasteland, the Grail Knight Community is dying from within, the members wearing white and grey bandages. After curing Amfortas in the end, Parsifal chooses to leave this sickening community (by a railroad appearing on stage) led by Kundry and followed by some of the knights, while the remainder of Knights gather around Gurnemanz, the apparent new leader.

Nikolaus Lehnhoff writes in the program notes: "After the mass destruction the last survivors, and thus the last humans, slowly begin to communicate across the ruins. Just like Parsifal and Kundry, they try to find, feel and share love and compassion once again".

A very strong cast was assembled for these performances: Waltraud Meier remains an astonishing Kundry, having brought this role to an entirely new level during the last 25 years as documented on several CD- and DVD-recordings. Matti Salminen is a commanding presence as well as vocally secure as Gurnemanz. Christopher Ventris, a both physically and vocally convincing Parsifal, is matched by Tom Fox´ fine Klingsor. Thomas Hampson may seem a bit underpowered as Amfortas, who is portrayed as weaker than often seen, but at repeated viewings, his portrait has grown on me and I find it quite fitting to portrait a leader of a sickening cult.

Kent Nagano draws a fine and lucid performance from the Deutsches Symphonie-Orchester, which also continue to gain weight after repeated listening.

A relatively tedious 30 minute documentary accompanies the DVD explaining the storyline with clips from the production. For those unfamiliar with the opera, it may be worthwhile, though.

In summary, an innovative Parsifal staging of high musical quality. For the moment, probably my favourite choice among commercially available Parsifal recordings on DVD, although those inclined towards more traditional stagings may opt for the 1982 Wolfgang Wagner Bayreuth production or the Levine-conducted, though dusty Metropolitan production (also with Waltraud Meier), both of fine musical quality.

But the search for the optimal Parsifal DVD is still not over. I continue to hope for a Barenboim release.

I was always away from this long and complex opera. I've received this dvd as a gift in 2004 and was archived since then. This last good friday y was ill at home, so i decided to give it a chance. From 7pm to 12am with 20min intermissions, i discovered a new frotier in my interest for music. So i'am looking forward to get deep in my unlistened recordings of this opera. This production specially was very good for Meier and Salminen, wich i enjoyed much. Not atraditional production, but well conceived.