Here, time becomes space - the return of Haitink to opera 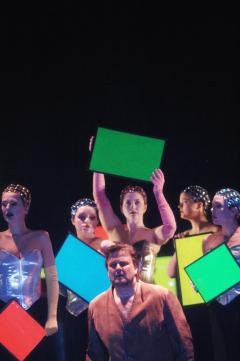 And while we´re waiting for Haitink´s ROH Parsifal this december, this is where I spent part of the Easter 2007:

"Zur raum wird hier die zeit" (Gurnemanz, Parsifal 1st act) - the self-proclaimed "motto" of Hans Hollmann´s Parsifal staging at the Zürich Opera. Hollmann works with "rooms of thought" and contrasting colors and lights: Black vs. white - black/the fool (reine tor) - red/blood/flower-maidens. Light vs. darkness. Understated designs, austere in conception. He seems to have transferred the simple dark sets with superimposed colorful geometrical figures from his Die Frau Ohne Schatten in Dresden to his Parsifal in Zürich. The images are beautiful and simple and allows you to focus on the music. And does Kundry die? Of course not ...

And musically, this evening was top-class:

First of all, Matti Salminen is an excellent Gurnemanz – while he does not have the voice of René Pape (OK nobody has, really), he has an equally convincing stage presence, and brings a dignity and power to the figure of Gurnemanz, which was the absolute highlight of the evening and which I´ve previously only seen with Pape. And he uses his voice very cleverly – there is no wobble at all and he has a way of convincingly delivering the top notes despite of them probably being a little above his maximum comfort zone. As he also demostrated very convincingly earlier this season as Hagen in Berlin. And, for once, a convincing Parsifal in Christopher Ventris - vocally his top-notes may be a bit strained, but he has the right physical presence (he is no wimp!) and is a convincing actor. Good news for both the ROH and Bayreuth, where he will repeat the part in the upcoming season. Yvonne Naef has a beautiful creamy elegant voice, which I´d think better suited to a role like Fricka, even though she is a fine Kundry. And a strong Amfortas in Michael Volle completed a very strongly cast production.

After leaving the Royal Opera Covent Garden in 2002, Bernhard Haitink claimed, that his operatic career had ended..but after 5 years he´s now returned to opera with this Parsifal in Zürich. I must admit, I´ve never been a huge fan of his symphonic work, but here in Parsifal, he was in superb shape. Brilliant playing from the orchestra (strings in particular), never loosing the pace throughout the 4+ hours. Attention to detail, without loosing the general picture. And with excellent precision and coordination.

This is really good news for the ROH, Covent Garden, where he will conduct Parsifal this december. Not only is this Parsifal "the bargain of the season" in terms of ticket price per minute of music - it may actually turn out a high-quality performance as well.

Interesting article. Thanks. I have always loved Haitink. Amy