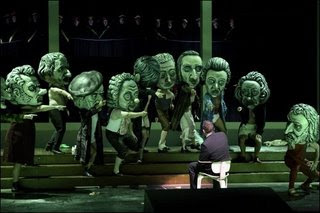 Don’t attend the Bayreuth Festival simply to have fun, drink beers with your friends and listen to good music, because nobody else does. Wagner in Bayreuth is serious stuff and tensions ran high in the Meistersinger audience even before the curtain was up as audiences greeeted The Festival representative announcing the partial indisposition by Franz Hawlata due to back pain with aggressive mumbling.

In many ways, Meistersinger may be the most difficult of Richard Wagners operas to stage, not at least due to the many ambiguities: Is it a comedy? A tragedy? Is Beckmesser a comical figure? Or is he evil? Or maybe even a hero? And it is obviously more challenging to import t an authentic 15th century Nürnberg cobbler into a modern semi-abstract staging, than it is with Gods and Giants.

Since the re-opening of the Bayreuth Festival in 1951, Meistersinger has been staged twice by Wieland and three times by Wolfgang Wagner, both very keen on clearing the work from nationalistic tendencies, emphasizing either the historical context or the caricature elements of the work (Wieland) or the down-to earth elements (Wolfgang). Katharina Wagner joins this tradition and is primarily interested in the socio-politic aspects of the piece as opposed to the love story between Eva and Walther.

The outline of the production is as follows:

The Meistersinger are governors of a traditional art academy, placed around a wooden table while guarding the sacred flame. The apprentices are students. The main concept seems to evolve around the idea that destruction of these traditions is necessary for society to develop.
The question then is: With what are these values replaced?

Hans Sachs is the outsider, a typist, chain-smoking in bare feet. Initially Walther, a painter, is the rebel, aggressively splashing paint aimlessly around when not painting “Eva” on sculptures. He quite literally turns things upside-down, such as paintings of Nürnberg and clearly is infatuated by himself. More than by Eva, anyway.

The ideals of the Meistersinger, represented by grotesquely oversized masks and figures of Goethe, Schiller, Bach, Wagner and other German icons dancing naked around, are cast down by Hans Sachs. Sachs also burns doublets of both a conductor and stage director. Subsequently, however, both Walther and Sachs undergo a development from rebels to conformists and conservatives, while Beckmesser on the other hand turns into an angry rebel. Walther changes from paint-splashing rebel to conform family father in a screen-show set up by Hans Sachs in which Beckmesser seems the only authentic participant with his rebellious guitar-accompanied song.

The Bayreuth audience is placed on a secondary stage as witnesses. In Hans Sachs´ infamous “deutsches volk” phrase (which made Konwitschny famously stop the piece in Hamburg) an oversized male statue appears on stage – probably to display the irony of the quotation. In summary, conformity and conservatism is replaced by conformity mixed with more than a touch of cruelty. As I see it.

First of all: I fail to see any major controversy in this staging. Obviously, when compared to the relatively conventional production by Wolfgang Wagner preceding this one, Katharina Wagner´s staging is closer to the Regietheater school than previously seen in Bayreuth and closer to the likes of Konwitschny and Marthaler (though I fail to see the often-quoted similarities between her and Schlingensief) than to her father.

Secondly: There is much good to be said on this production, which I thought had many fine points. However, a bit more discipline in the presentation of the ideas would make them stand out more clearly. A lot is going on at stage simultaneously. But she proved herself a talented, though not fully developed stage director.

Vocally, the evening was largely disappointing. Franz Hawlata´s is a great actor, but Hans Sachs is far too challenging for him vocally. Also Eva was undercasted with a shrill-sounding, non-acting Amanda Mace. Klaus Florian Vogt was in excellent voice as Walther (replacing Robert Dean Smith, who withdrew due to artistical differences). Furthermore he is definitely not a wimp and looks rather good, though in an eerie way. Rather odd, the entrance of Vogt´s Walther playing piano in tennis shoes is an exact copy of a scene in the Baden-Baden 2006 Lohengrin production.

Best of the singers was Michael Volle, with an excellent characterization of Beckmesser.
Unfortunately Sebastian Weigle´s reading was rather unexciting. The prelude started well, but the rest of the piece didn´t seem to flow.

Extended audience applause after Hans Sachs literally put Eva, Walther, David and Lena into two frames. And scattered applause after his monologue as well, something I have never experienced this before – and then in Bayreuth of all places..

I would say the booers just won over those shouting bravo at curtain call, Katharina Wagner seemingly unfazed at her solo curtain call.

These signs were displayed all over the Festival House, though I am not sure why: 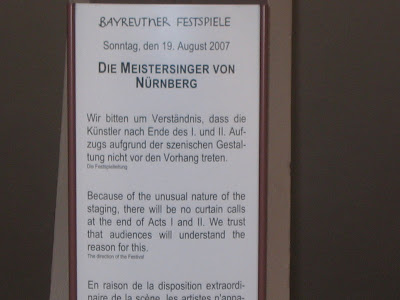