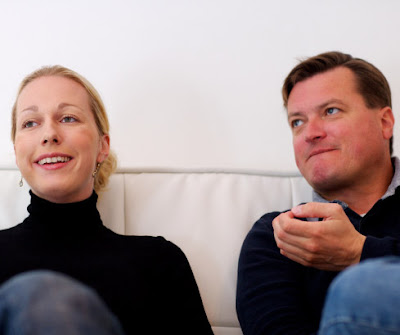 AC Douglas just reported this from AP Berlin (quotes below):

"BERLIN (AP) — A great-granddaughter of composer Richard Wagner is teaming with star German conductor Christian Thielemann to bid for the leadership of the Bayreuth festival, the pair announced in an interview published Saturday.

"We have decided to run as a leadership team," Katharina Wagner was quoted as saying in an interview with Thielemann, published by the daily Frankfurter Allgemeine Zeitung.
Wagner said that she and Thielemann, 48, had laid out their ideas to Wolfgang Wagner, who has a lifetime contract, and that "this would for him be a basis on which to find an agreed solution."
"We know each other so well that we can tell each other our opinions without holding back," Thielemann was quoted as saying. "Apart from that, we would be exactly the right age for a new era."
In Saturday's interview, Katharina Wagner noted that the current festival leadership has already signed contracts with artists as far ahead as 2015 — meaning that, for the next eight years, any new leadership essentially would be administering the legacy of the Wolfgang Wagner era.
"I don't want to be uncharming now, but it is a fact that my cousin Nike and my half-sister Eva would, on grounds of age, have no possibility under these circumstances to develop their own profile," she was quoted as saying.
"Before they had their hands free for their own planning, they would be well above retirement age," she added. Both women are 62."

I have published a complete translation of their interview to the Frankfurter Allgemeine here... not uninteresting..

This is a very good tactical move indeed. Christian Thielemann is immensely respected for his traditional values throughout Germany and combined with the fact that most Germans still prefer a direct descendant of Richard Wagner to run the Bayreuth Festival, I´d say they have a very decent chance of succeeding Wolfgang Wagner.

This has the makings of a docu-soap, which is continued here..