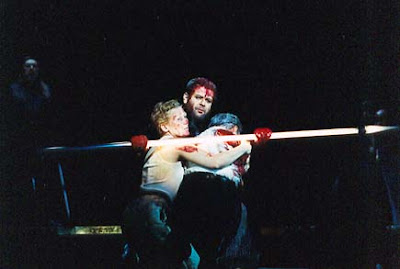 Christine Mielitz seems to to have applied psychoanalytic tools in what appear to be a feminine analysis of Parsifal, premiered in 2004 at Wiener Staatsoper: For her, Amfortas with his suffering is the main focus. The knights of the Grail appear a closed group of men, marked by the system, which suffers from a lack of insight into feminine values. Which Parsifal gets from Kundry. And since Parsifal is not branded by this system, he is able to release Amfortas. And through these insights, the close male circle of grail knights may be enriched. Or at least that´s my gathering of the staging. Does Kundry die? I´m not sure. Mielitz herself seems ambiguous on this point as well, stating in the programme that Kundry "voluntarily leaves the masculine society of knights after having been released by Parsifal".
When this production premiered in 2004, Thomas Quasthoff was Amfortas (in his only second operatic role apart from the Minister in Fidelio), and he was the center of attention in the production as well as in the German-language press, which hardly commented on the rest of the production.
This Easter Sunday the role was sung by Falk Struckmann who seems to always look the same on stage – edgy, irritated and jumping around. Regardless of the part he´s singing. I´ve seen him do this here in Vienna as Telramund, Rangoni and Iago as well as the Dutchman in Berlin. This time he did it as Amfortas. And, luckily for him, he is definitely one of these singers who sounds vastly better live than on record. While his recordings ao. of Wotan find him in shrill voice he comes through all right in the theater, fine in both voice and characterization.
I was disappointed by both Thomas Moser (Parsifal) and Deborah Polaski (Kundry) for the same reason: They were incredibly boring to watch (and listen to)..Vocally they had no problems with their respective parts – but both voices seemed flat and emotionless. Had I not heard René Pape as Gurnemanz a couple of days previously in Berlin, I would say that Peter Rose makes a fine Gurnemanz. Period. He has some excellent low notes, and keeps his singing up throughout the opera. And it´s probably unfair to point out that he has neither the stage presence or vocal power that Pape brings to this role. And it´s definitely unfair to compare him to Pape in the first place - however as long as René Pape sings the same role at the same time virtually around the corner (by US standards) and people come to Vienna specifically to see Parsifal, it´s only fair to point out, that in my opinion the Berlin Staatsoper Parsifal is vastly superior to the one in Vienna - at least in this season.
Not only because of Pape: Donald Runnicles conducted, and while the quality of the orchestra playing was immensely higher than in his Ring in Berlin earlier this season, I still find him impassive and restrained with this music – particularly with an eye on the competition in Berlin (Barenboim) and here in Vienna next year (Thielemann, who just completed a magnificently conducted Bayreuth Ring).
I seem to have caught this production in the wrong year: Two years ago Thielemann was conducting and both Placido Domingo and Waltraud Meier were singing and next year Thielemann is conducting with Stephen Milling and Mihoko Fujimura singing..
I wouldn´t mind going to Vienna to see this production again with Thielemann - his live recording here from Vienna released last year is incredibly beautiful. And on level with the greatest on record. It must be quite amazing to hear him conduct Parsifal live.
I attended the performance on Easter Sunday 2007.
To watch a videoclip from this production, open this page and click on "videobeispiel".
Photo from: www.staatsoper.at
Posted by mostly opera... at 22:20

That is an interesting approach to Parsifal - the Syberberg Parsifal film actually portrays Parsifal as a woman (lipsync with tenor) in the end of the second act. The Quasthoff Amfortas must have been staggering.

I agree - it is an interesting approach.
And yes - from what I´ve heard from others Quasthoff was completely staggering as Amfortas. There are some pictures of his Amfortas in the programme - almost eerie. Unfortunately he is not going to do any more opera - I heard him say so (stating unwillingness to be separated from his family as the main cause) in an interview in Copenhagen earlier this year.