Bayreuth - some info if you decide to go...

Public transport: Pretty straightforward with train from Munich via Nürnberg. Takes app. 2,5 hours. Be aware that the last train from Bayreuth train station leaves at 2210 pm in any direction - this means that the only performances in 2007 after which you would be able to catch the train were Rheingold and Tannhäuser - and with good running shoes - Walkure (finished 2145). 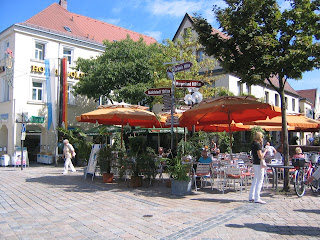 It is relatively straight-forward to drive around the area as in the entire Germany. Several car rental offices operate in town (Avis, Hertz etc.). Prices average 200 Euros for one week, free mileage.

Festspielhausparking: The designated parking areas behind the Bayreuth Festival house may only be used if you have a special permit, but it´s easy to park (and free!) just along the side roads of the green hill (appropriately named Wotanstrasse, Telramundstrasse etc.) - 3 minutes walk from the Festival house. 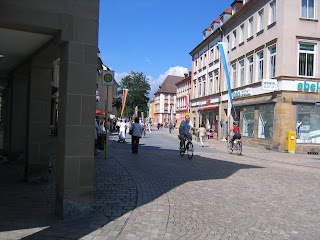 It is possible to find a place to stay in Bayreuth even if you arrive without a booking as I did in 2007 (not really recommended, since I had to change hotel every day for three days).

Other options are Bamberg (below view from our hotel room in 2007) - a vastly more beautiful city: 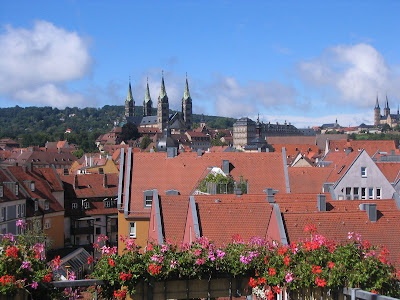 Another option is Nürnberg (82 km south of Bayreuth)

Activties and excursions:
On all performance days several introductory talks (1-2 hours) was given at various locations in town. Some in English as well.

Bayreuth is a relatively anonymously looking town (2008 photos from the city center here), and does not hold any particular sights apart from Villa Wahnfried and the Franz-Liszt house.

Excursions to Bamberg, neighboring castles and Dresden were arranged by the Tourist Office on all non-performance days (reasonably priced at 40-50 Euros per person). Bamberg is exceptionally beautiful and highly recommended. Dresden as well, but a bit further away (200 km). 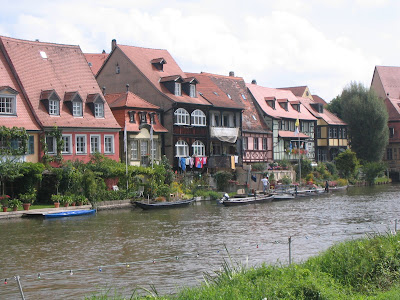 By the canal in Bamberg

Nürnberg may be easily visited by train (app. 1 hour).

For those with cars, other options are Rothenburg ob der Tauber and the magnificent castles south of Munich, Neuschwanstein, Hohenschwangau and Linderhof. As well as the extermination camp of Dachau.

I'd say there were several places to visit in Bayreuth besides the Festspielhouse and Wann fried. There is Liszt's house which I found fascinating, there is the baroque theater he built for his wife and the year I was there 2006 there was a hugh Wagner Ring desplay all around the outer rooms and the stage. Then there was the new castle, which was pretty interesting, all within walking distance. I didn't even metion the cemetary, which was just across the stree from the Ramada where we stayed, and had extremely service for a very good price.
Then, as you said there were various day trips if you had any stamina left to see them.