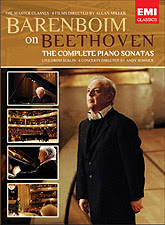 Recorded live at the Berlin State Opera 2006, this DVD-set contains four DVDs with the complete Beethoven piano sonatas and two additional DVD´s with masterclasses from Chicago.

Heard live as here, Daniel Barenboim´s Beethoven is close torevelatory. Authoritative, dynamic, precise, with a razor-sharp technique. And with perfectly controlled tempi and dynamics over the long ranges as well. Just listening to the presto of the "Moonlight" sonata is almost worth the price of the entire set. The sonatas are not played chronologically, and often a sonata from the earlier vs. middle period are played next to a late-period sonata.

A handful of wrong notes are thrown in occasionally, however with no implications for the overall impression. Combined with the electric atmosphere in the packed Berlin State Opera, these performances are close too unbeatable.

The concluding masterclasses include several younger pianists, among those Lang Lang, who actually listens to what Barenboim has to say. As was also my impression of him in Salzburg, Barenboim comes across as a high-carate teacher: Polite, considerate - and most importantly: Always helping the students to achieve the interpretation they desire as opposed to the interpretation he may prefer himself.

And does he play as he teaches? Yes, almost all the time....

Daniel Barenboim with an excerpt from the Appasssionata: