The Stockholm Ring - success for Götterdämmerung 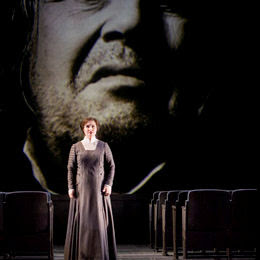 Götterdämmerung opened on September 15th at the Royal Swedish Opera as the last of the four in Staffan Valdemar Holms Ring Cycle.
According to Swedish newspapers, to major success.
Music Web International:
"From the fairy-tale optimism of development in Das Rheingold with its colourful settings, its technical evolution and the building of Valhalla, the new Stockholm Ring des Nibelungen has step by step moved in time from Wagner’s own days closer to present times and in pace with this transportation grown ever more sparse, even bleaker. In Götterdämmerung we are well into the twentieth century, around World War One and the world is mainly in black and white. The moving images of the cinema have conquered the world and essential parts of the opera take place in a movie theatre, where flashbacks are shown to remind the audience of what has gone before. The model is Fritz Lang’s Nibelungen films. Even on other occasions filmed sequences – in black and white – accompany the proceedings. Thus the three Norns – dressed in black and white like waitresses - sing and act on an empty stage against a backdrop with three mime artists impersonating the Norns of bygone days. Now they see only a withered trunk of the World Ash and then their thread entangles and they can no longer foresee the future. So much else is also withering. Both Gunther and Gutrune are crippled, Gutrune even bound to her wheel-chair in the beginning and attended by two nurses. Wotan is recurrently shown in close up, grieved, mourning the world of the Gods falling in pieces. There is even interaction between the present and the past when Brünnhilde at the end throws the ring back to the Rhine and on the screen it is caught by Flosshilde. The Rhine overflows its bank and on the screen we see actual pictures filmed during the spring flood. Götterdämmerung (or Twilight of the Gods) is of course permeated by a sense of doom but also by a hope for a new and better world and since there is little in the way of sets and props, focus is on the individual characters.....
[The Royal Orchestra].. contribute greatly to the general success. They have been impressive throughout this Ring and in Götterdämmerung, where the orchestra play an even more active part than in the preceding operas, they grow in stature to challenge even Barenboim’s Bayreuth players. ....Gregor Bühl has shown increasing understanding of Wagner’s scores and in Götterdämmerung he fired his forces to playing that was overwhelming in its dynamic potency.
It may sound chauvinistic but I don’t think many opera houses in Europe can muster a cast of such excellence with mainly home-grown singers. There was hardly a weak link. ...Hans-Peter König’s Hagen was the most formidably sung since Gottlob Frick’s time.......Lars Cleveman was the young Siegfried a year ago and he was scheduled to sing his older incarnation at some later performances but due to illness he was called to step in at the premiere with only six hours’ notice. Small of stature, he created a lively, cheerful and carefree boyish Siegfried and the brutality of his murder became even more disgusting than usual. He seems to have lungs of steel and vocal cords of the same material, allowing him to produce heroically ringing high notes. His stamina is also admirable....
On top of all this excellence Stockholm has a Brünnhilde probably without peer in the world today. Katarina Dalayman showed her credentials in a superb reading of the title role in Die Walküre a year and a half ago... she was deeply involved and expressed the character’s contradicting feelings with lyrical sensitivity, razor-sharp vehemence and on top of that a nobility and warmth of tone that made her humanity stand out. At her curtain call she was deservedly greeted with standing ovations.
There will be several performances of this Götterdämmerung during this autumn and later this season three complete Rings will be given. This is a cycle worth any Wagnerian’s money and considering the overall excellence it is only to be hoped that some record company will grab the opportunity to make it available on discs and preserve it for posterity. Swedish Radio have broadcast all the parts."
Review in full here
Posted by mostly opera... at 18:06