Maskarade – my debut at The Royal Danish Opera 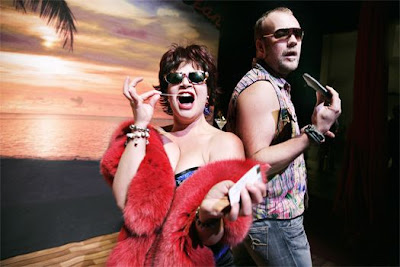 Kasper Bech Holten unsurprisingly went for a modernization of Maskarade, the first modern version of this Danish National Opera at the Royal Danish Opera, now at the new waterfront main stage The Copenhagen Opera House. As expected, the production caused some controversy, but also a received a fair share of positive responses.

Maskarade is updated to the near-present and follows of the old story of masters, servants and young love, which predictably conquers all. There are several inventive aspects to the stage design such as odd geometrical settings and shapes, a horizontally moving stage, a lineup of outdoor beds in the nocturnal Act II and so on. Very, very entertaining. Not to mention the acrobats appearing towards the end of the opera, in the Act 3 masquerade - where I appeared as well..

Having bought a last-minute 50% discounted ticket, I had a 1st row seat just behind the conductor. Leaving the auditorium for drinks in the 1st intermission, I was approached by a member of the production team, asking me if I would like to be part of the production. The point being, that Jeronimus (the main character – an old man who likes young women among other things) during the final masquerade was to climb off stage, through the orchestra pit, appear next to the conductor, grab a girl from the audience and bring her on stage….and that girl happened to be me.

So towards the end of the opera, Christian Christiansen (Danish bass, who made a very fine Jeronimus), appeared right beside conductor Michael Schönwandt (also excellent), grabbed my arm, ran with me along the 1st row, further on backstage and then onto the stage, where I was to stand at the center of the stage, while he was dancing a bit around me. This all lasted for a maximum of 5 minutes and was incredibly entertaining. Just looking out at the sold-out auditorium from center stage was an amazing experience.

Everything was black, I saw the conductor in front of me, but almost nothing else. Afterwards I watched the final 15 minutes of the opera from a backstage position, really interesting as well.
First of all, I had no idea how much noise there is backstage during a performance. The production team making sure everybody enters the stage at the exact time they are supposed to, video screenings of the orchestra pit and the stage, people running about. Rather funny to have several people from the audience coming up to me afterwards thinking that I knew somebody from the production team and deliberately was placed in the 1st row…

On my way home, I talked to a member of the chorus, who told med that initially they just grabbed a girl without asking beforehand, but after a situation a couple of weeks earlier where the chosen girl refused to come along and Jeronimus had to pick one of the violinists, they had decided to ask potential “subjects” in the 1st intermission for permission. Furthermore I got a mask with Christian Christiansen´s autograph.

This production was released on DVD December 2007 - unfortunately without my participation.

I find this to be real justice in light of your wonderful service to opera in the blogosphere and your comments about how little the performers see beyond the stage and how noisy it is are very interesting.

Gee, that must have been fun. Too bad it wasn't in Vienna, Berlin or Bayreuth! :-)

Yeah - that would have been something...