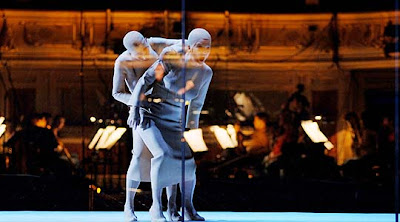 The opera, subtitled “concert opera” is composed for a relatively small ensemble of 23 instrumentalists, predominantly brass and woodwinds together with a harp, a piano and a string quartet. The music was described as: “masterful”, “written with great clarity”, “elegant”, “devastatingly beautiful” and “stylistically reminiscent of baroque opera”. 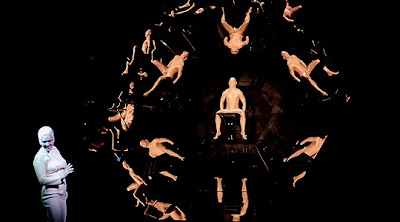 The opera is based on the Greek myth of Phaedra’s unrequited love for her stepson Hippolyt. The libretto is by Christian Lehnert and divided into two main sections: “In the morning” and “in the evening”, which again are subdivided into 5 and 4 sections, respectively:

“In the morning” Hippolyt has gone hunting. His stepmother Phaedra confesses her love for him and he rejects her. The goddess Aphrodite (who loves Hippolyt herself and furthermore is jealous of the hunting goddess Artemis, who has Hippolyt´s exclusive attention) promises to help Phaedra win Hippolyt. Phaedra then writes a letter to her husband Theseus claiming to have been seduced by Hippolyt, and Theseus then (with help from the sea-god Poseidon) kills Hippolyt upon his return from the hunting trip. This part of the opera follows the legend of Phaedra as previously retold by Racine and others.

In the second part “in the evening”, the opera allegedly follows a mythological tradition of the Phaedra legend described by Ovid: Artemis has brought Hippolyt to her home and resurrects him under the new name of Virbius, while Phaedra and Aphrodite tries to lure him into the underworld. Aphrodite abducts him and keeps him imprisoned in a cave. The downside to Hippolyt´s new existence is that he is only aware of his existence and consciousness in fragments. Once more, he rejects Phaedra, escapes the cave and resurfaces as a sort of wood-god. 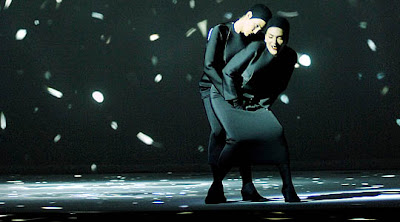 The staging was virtually unanimously praised by the German press, directed by Peter Mussbach and with scenography by the Danish-Icelandic artist Olafur Eliasson. According to the production team they wanted to create 'a new kind of theatrical evening, reflecting and profoundly questioning the actualities of our way of looking at the world' applying effects such as placing a large mirror in the back of the stage alluding to a “theater within the theater”; placing the orchestra above the last rows of the parterre, and emphasizing stage lights.
General praise for the soloists, Maria Riccarda Wesserling as Phaedra (after Magdalena Kozenà´s cancellation), John Mark Ainsley (Hippolyt) and Marlis Petersen (Aphrodite).
The Ensemble Modern was conducted by Michael Boder. 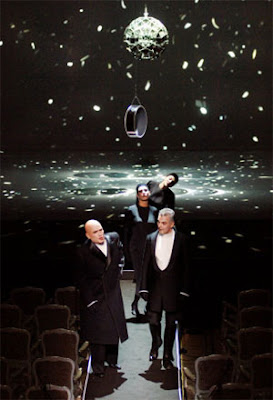 This is a co-production between the Berlin State Opera, the Monnaie Theater in Bruxelles, Alte Oper Frankfurt and the Vienna Festival. 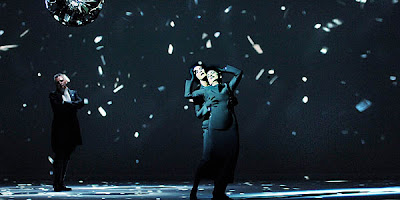 All photographs by Ruth Walz from the webpage of the Berlin State Opera
Posted by mostly opera... at 19:45