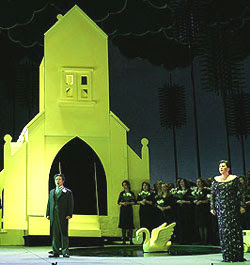 After more than twenty years with a Vienna Lohengrin from the darkest of the dark middle ages (also available on DVD), Australian native Barrie Kosky staged a new Lohengrin production earlier this season, predictably causing controversy as the first modern Lohengrin to be seen at the Vienna State Opera.

Barrie Kosky claims no interest Lohengrin as a historical drama. Contrary to Robert Carsen in Paris he does not see Lohengrin as a political piece. For Kosky, Lohengrin is about dreams, and this Lohengrin takes place in a fairy-tale dreamworld.

Tiny yellow wooden swans appear infrequently throughout the opera, but the dominating symbol is the chain controlling Lohengrin´s arrival as well as his departure. In the end Elsa collapses by the chain as her brother is returned in the shape of an embryo encapsuled in a water-drop - a dream figure as well.

The sets are simple and rather aesthetic, the major part of the stage held in black with bright yellow small houses/symbols presented continuously. This world of this Lohengrin is clearly an abstract world.

Importantly, Barrie Kosky chose to make Elsa blind and she´s walking around the stage guided by a walking stick. In theory, I find this a valid point, however it has profound dramatic consequences: All the elementary human tension between Elsa and Lohengrin (and Ortrud as well) is absent while Elsa waves the walking stick. And Barrie Kosky thus looses the elementary interpersonal drama of Lohengrin on the floor.

Muscially, the performance was first-rate. Peter Seiffert is vocally a superb Lohengrin. He hits the notes effortless, but an engaging stage presence he has never been. Paired with his off-stage wife Petra Schnitzer, a very fine and warm Elsa.

Petra Lang is an exceptionally fine Ortrud. She has dignity, she is not shouting, her voice is beautiful and she is a fine dramatic actress - a much needed Ortrud in the tradition of Waltraud Meier. Telramund suits Falk Struckmann eminently, both vocally and physically. However, he clearly was vocally indisposed and simply could not hit the notes in the 2nd act – which got progressively worse until he died, literally.. almost like watching a thriller.

The Vienna State Opera orchestra played brilliantly under Peter Schneider with an almost unearthly quality to the prelude and continuing at this high level throughout.

It is no small decision for a house like the Vienna State Opera to commission a "modern" staging of a civic treasure like Lohengrin.

Recent rumours have it a very distinguished Wagnerian conductor (whom I will not name here) refuses to conduct this production, which spurs additional rumours that a new Vienna Lohengrin is upcoming in 3-4 seasons in order to secure the services of said conductor. As always: We shall see..
Posted by mostly opera... at 22:17

I do hope you're right about the new production. The old Vienna production could be enormously effective. I'm familiar with the DVD but also saw it live in a run in (I believe 2000 - Pape and other usuals suspects - Meier's Ortrud unsurpassed other than by her own effort at Covent Garden several years later). There really does need to be a good traditional production at least one major house, although good individual direction (obviously not always a feature of alternative stagings, either) is of the essence.