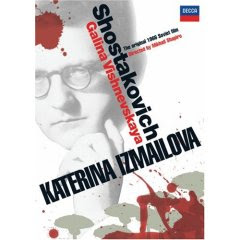 As part of the rehabilitation process, Mikhail Shapiro directed this "Katerina Izmailova" film in 1966, using Russian actors for all the operatic characters except Katerina, who was both sung and acted by the radiant Galina Vishnevskaya.

Not a staged opera, but a film set in the 19th century on a country estate. The impression of pre-Revolutionary Russia is excellently conveyed and views of the estate with surroundings provide for insights into Katerina´s life, which are difficult to achieve in staged performances. Especially in the last act, which is the strongest section of the film: While transporting the prisoners to Siberia, the filming of countryside and surroundings convey the increasing despair felt by the characters in a way different to that of staged productions.

The lip-synchronizing is not without odd moments, but I wasn´t particularly bothered by it.

Shostakovich specifically wanted to emphasize the positive aspects of Katerina´s character in this film, apparent in the music as well with clear, melodic lines for Katerina as opposed to both Sergei and in particular her father-in-law - all portrayed as grim figures in both music and acting.

Galina Vishnevskaya is brilliant as Katerina, being a genuine singing actress. Her very sympathetic portrait of Katerina´s development from bored housewife to convicted murderess is very convincing. Shostakovich´ music is both deeply moving, profoundly shocking and eerie at the same time and Lady Macbeth/Katerina Ismailova is probably the closest thing to an operatic thriller available.

As both a historic document and alternative view of Lady Macbeth this DVD is definitely recommended. For a staged performance, Martin Kusej´s 2006 Amsterdam production with Mariss Jansons and Eva-Maria Westbroek is highly recommended.
Posted by mostly opera... at 01:12