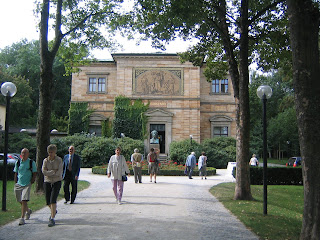 The major tourist attraction in Bayreuth besides the Green Hill, Villa Wahnfried was Richard Wagner´s residence, located in the center of Bayreuth, the place where he wrote his later works and where he is buried in the garden.
I am in the library in Villa Wahnfried, surrounded by Wagner´s books together with about 20 other visitors listening to old Bayreuth Festival broadcasts (I continue to be amazed at the quality of singers in the 1920´s and 30´s that I have never even heard about). And Maria Callas as Kundry.
Apart from the obvious interest at being in Wagner´s house, seeing the piano used in composing the Meistersinger etc., the most interesting exhibitions here contain the large collection of old stage photographs from the Festival House from 1876 and onwards documenting performance practices in Bayreuth and putting quite a few things into context – at least for me: No wonder, the Chereau staging caused such controversy in 1976 judged by photos from the preceding 1970 Wolfgang Wagner Ring. And again, judged by the stage photos, Meistersinger seems to have always gotten a fairly conservative treatment in. Which may again explain some of the reactions to Katharina Wagner´s new Meistersinger, which is modern in the set-up but not in any way controversial compared to stagings of Wagners works seen elsewhere. 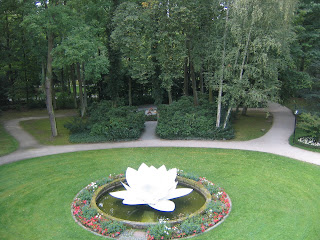 Wagner´s grave covered with flowers from the American Wagner Association: 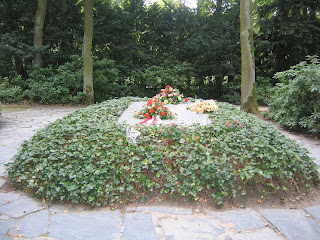 Quite a few curiosities are on display here, such as a letter from the 1980´s (!) addressed to Herr Richard Wagner, asking him to declare his bank affiliations! 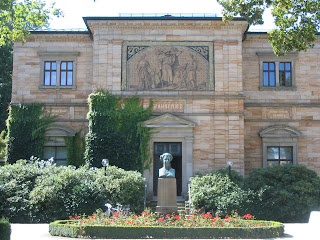 And displays of curious Festspielhaus statistics, such as the duration of all performances from the 1930´s and until 1983 (where the display unfortunately ends), telling us that the greatest time difference of a single performance was between Toscanini and Boulez in Parsifal (Toscanini being 1 hour 8 minutes slower than Boulez). And Barenboim in 1982 conducted the slowest Tristan since Toscanini, who in turn was probably the slowest conductor ever heard in Bayreuth (at least until 1983). I also found the plexi-glass model of the orchestral pit very informative. And the letter to Wieland and Wolfgang Wagner in 1953 complaining that the new stagings of Wagner´s operas in Bayreuth violated Richard Wagners wishes…
In the publicly available computers you may search information on Bayreuth performances until this year. Looking out the window, you look at Wagner´s grave in the back yard covered with flowers from various Wagner Societies. The whole place looks bit run down however, and would greatly benefit from renovation, and maybe some facilities – such as a café etc. The garden is a very nice place to hang around.
Concerts take place here during the festival on non-performance days – this year Robert Holl has sung “Winterreise” and this evening a piano recital with works by Brahms and Beethoven is scheduled. 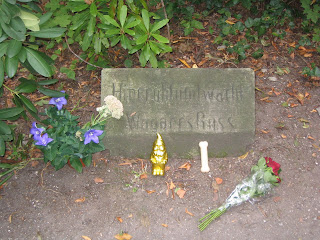