the authentic rigoletto from mantua with domingo, novikova and grigolo 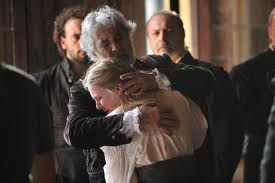 For those seeking authenticity, it does not come more authentic than this: A production of Verdi´s Rigoletto filmed on location in the beautiful Palazzo Ducale of Mantua, complete with gardens and a river. It is even filmed over two days as to place the action at the right time of day.
Not only is this an impressive technical accomplishment as all the singers sing live with Zubin Metha´s excellent orchestra, located in another part of the castle, relying on on monitors and advanced auditory equipment. It is also, in itself, a both extraordinary and spectacular production, where we follow the singers moving through the various parts of the castle in real time creating a very authentic and realistic atmosphere. For those not familiar with Rigoletto, this is a good place to start. Especially since the musical, but above all the theatrical aspects of this production were were impressive:

First, Plácido Domingo, who succeeds in bringing his personality and life experience to the part of Rigoletto. This was the positive part. A baritone, of course, he is not, and if  judged by his singing alone, he really does not have the voice anymore to play in the major league for these parts. While he is reasonable in the higher-lying Act 1, once he gets to his major moment in “Cortigiani” (see the video clip below), there is no way to hide that this role is, in fact, quite too deep for him. Had I been casting director, Leo Nucci would have been my first choice. Nucci, of course, could have been first choice here as well, but somehow I doubt it.

At least Ruggero Raimondo´s voice has faded into something not unpleasant, an dramatically he is a superb Sparafucile, though with a quite younger sister in the wonderful Maddalena from Nino Surguladze

As Gilda, Julia Novikova is virtually perfect. She even looks about the right age and is entirely convincing as  the naive girl locked in her house every evening by her father.
Vittorio Grigolo seems perfect as well as the selfposessed, arrogant Duke. A Duke entirely without sophistication, Grigolo´s voice seems shallow and constrained however.

All in all, a Rigoletto with much to enjoy for everybody.

Why do fine operas like Palestrina, Mathis der Maler and Doktor Faust attract only a small contingent of passionate admirers today?

Thank you - much appreciated