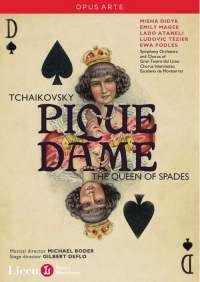 Tchaikovsky´s opera about the gambling addictive Hermann, who loves Lisa, but kills her grandmother the Countess in order to gain three secret winning cards is not quite at the same level of his Eugene Onegin, but nevertheless contains some beautiful music and 2-3 famous arias (one by Yeletsky, Lisa´s rejected fiance, 1-2 by Lisa). But above all it is the role of the Countess, which offers one of the few possibilities for great singer personalities and the role is often cast with singers far past  the age of normal retirement, presently both Anja Silja and Agnes Baltsa may be seen in the role.

The production by Gilbert Deflo is elegant and largely traditional: Period costumes, a sparse background, same recipe as he has previously used as in his Paris versions of Manon, Ballo in Maschera and Rigoletto (Zürich). Unfortunately it is not at the same levels as his best work, such as an extraordinary version of Prokofiev´s Oranges. Thus, while the central confrontation between Hermann and Countess is quite thrilling, other parts, especially the first act seems a bit jaded.

Hermann really is a quite unsympathetic character and Misha Didyk plays him well. Vocally, however he is quite overchallenged sounding heavily strained in almost every forte passage. Emily Magee is an at times wonderful and very touching Lisa, though she seems to mature for the role, which doesn´t seem to lie well for her and is not among her best. Ludovic Tezier in what is basically a one aria  + a bit more role, sings his one famous aria well and looks sufficiently disappointed by Lisa´s rejection of him.

However, by far the strongest performance is Ewa Podles grandiose Countess, a true primordial force and an entirely sufficient reason to watch this DVD or at least the 2nd act.

Unfortunately the orchestra is somewhat disappointing as well, lacking both punch and density under Michael Boder.

Pique Dame is not well represented on recent DVDs, but however I doubt that this will end up as a first choice in five years time.
Ewa Podles and Misha Didyk in Act 2: