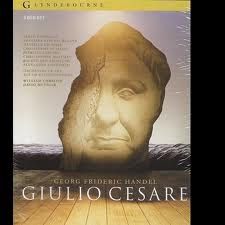 We are in the 19th Century at the time of the British colonisation of Egypt and the opera evolves around the clashes between the British (Giulio Cesare) and the Egyptians (Cleopatra and her brother Tolomeo). David McVicar has created a fast-paced exciting production, that really has to be considered a must for those interested in baroque opera. Even those not normally inclined towards baroque, such as myself, may find this production highly entertaining, which I certainly did. First of all, what really sets this production apart are the many rhythmic dances and movements accompanying the music.  Secondly, there really are some quite funny moments as well - to just mention one, take a look at Cleopatra when she dumps her cigarette into the urn of one of Cesar´s rival, Cornelia´s late husband Pompeo.

Danielle De Niese gives us an entirely unsophisticated, almost vulgar version of Cleopatra. Her voice rings clear, she has a very direct manner of delivery and she is a fabulous dancer. She definitely has the “X” factor  she seems completely involved in the portrait of this scheming character, no doubt helped by David McVicar´s entertaining personenregie. No wonder she had her international breakthrough with this role. Later, however, it became clear that she applies this particular stage manner to all of her roles at which point her career seemed to stagnate a bit.. However as Cleopatra, and as Poppea as well, she is fabulous. .

While I personally prefer a countertenor in the part of Giulio Cesare, I must admit that I have never seen a female singer as convincing as Sarah Connelly in a pants role: Her masculine bearing as well as forceful masculine straight-toned singing is simply extraordinary. Futhermore her presence comes with a hint of an underlying menace, very appropriate for a Roman emperor/British general.

Patricia Bardon sings Cornlia with beauty but the Erda-like power the part demands, she does not have. And yes, she sings Erda too, with the exact same problems as here. Angelika Kirchschlager in her first baroque production is a youthful Sesto, looking at least 20 years younger than Kirchschlager´s age.

Christophe Dumaux seems to be the Tolemeo of choice today appearing in almost every production of importance. While he sings beautifully, he somehow fails to leave a lasting impact on stage – after all he is Giulio Cesar´s main adversary but up against Sarah Connelly he seems bleak.

To complete the cast, there is an extraordinary rhythmic drive and vivacity in the Orchestra of the Age of Enlightenment conducted by William Christie.

This production will be seen later this spring at the Metropolitan Opera, where Patricia Bardon will repeat her Cornelia with David Daniels as Giulio Cesare and Natalie Dessay as Cleopatra, a role she also performed in the Pelly production from Paris. And Christoph Dumaux, of course, as Tolomeo.

This could well be the production of choice for many and in any case it is certainly worth a view. Personally, I still prefer Negrin´s production from Copenhagen, due to the even greater vivacity and Andreas Scholl´s Giulio Cesare.