first (and last?) mireille on dvd 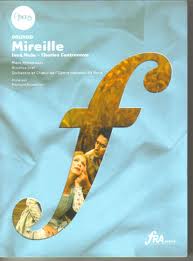 For this, the first production for Nicolas Joel after taking over the Paris Opera, he chose a largely unknown work by Gounod: Mireille. Based on Mistral´s poem and composed in 1864, 5 years after Faust and 3 years before Roméo et Juliette, Mireille had never before performed at the Paris Opera.

This is the story of a rich girl (Mireille) who loves a poor boy (Vincent). She is also loved by a villain (Qurrias) who injures the poor boy, but later drowns. While Vincent does not die, Mireille does, from sun stroke (!) when she exhausted joins him at the end of the opera after obtaining forgiveness of her father.

A quick look in the opera performance register shows that of Gounod's 13 operas, only Faust and Roméo and Juliette has been performed anywhere in the last three seasons. This production of Mireille will not change that, I believe, not even in France.

Nicolas Joel has opted for a largely traditional mise-en-scene, where I was transported back to the operatic productions of the 1970´s. Had the personenregie only been interesting, but here also Nicolas Joel seems to add nothing even remotely new or exciting.

The original setting is Provence, and Nicolas Joel has kept it like this showing us ripe fields, dark medieval cities and moonlit rivers. There is, however, beautiful music to be found here, even work as a whole lacks drama. Competing with a Devil (Faust) and a story by Shakespeare (Roméo), some peasants in Provence does not quite seem to do it.

As the protagonists Charles Castronovo is both naive and sympathetic as the poor Vincent and while Inva Mula was overacting, she still turned in a convincing performance.

This is a first on DVD, so do you want to see Mireille, this is it as I doubt there will be competition in the immediate future.