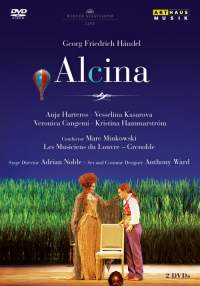 Well-educated British readers (I know there are some out there) will need no explanation as to who was Georgiana Cavendish (1757-1806), the Duchess of Devonshire, famous for her soirées in the Devonshire House in London. Some may know her from Keira Knightly´s portrait in The Duchess,

And we are, in fact, witness to such a soirée in The Duchess´ ballroom in London Piccadilly, where she is staging a performance by Händel´s Alcina (written in 1735 it could well have been performed here) performed by herself (as Alcina obviously) and her friends.

An intimate dining-room atmosphere, which suits the piece well, especially as it opens up into a field of almost neon-green grass and a clear blue sky (see above), which contrasts with the dark dining room atmosphere complete with servants and (perhaps?) her dissatisfied husband, the Duke, who seems to pop up a couple of times.

The director is Adrian Noble, British and former director of Royal Shakespeare company, also responsible for the staging of Macbeth at theMetropolitan opera in 2008.

Would it not have been obvious to make Ruggiero into Charles Grey, 2nd Earl of Grey, the gentleman with whom The Duchess has an illegitimate child after he had courted her in her saloon for some time? But no, this seems not to have been Adrian Nobles errand, as Ruggiero, as played by Vesselina Kasarova, in the beginning of the opera, clearly is a female friend of the Duchess.

To begin with Vesselina Kasarova: This woman´s singing is downright strange and peculiar. In fact, it is one of the most peculiar things I have heard on stage for a long time. When I heard her live in this part five years ago I found her “absolutely brilliant”. Now she is absolutely bizarre. Did these, almost yodling peculiarities really develop within the latest five years or did I just not have the ear for them then?

Her Alcina five years ago as well as now is Anja Harteros, who is a splendid Alcina, and an elegant Duchess of Devonshire, adapting to baroque style with an almost vibratoless top. Probably not the kind of role she will continue singing if she also wants to move into the heavier Wagner, as she has said (Senta).

While Veronica Cangemi was  far too thin-voiced, especially in the top as Morgana, Kristina Hammarström was a solid Bradamante. Most impressive, though was boy soprano Alois Mühlbacher as Oberto, with spot-on coloratura and solid intonation. He is 15..

Baroque operas are not plat du jour in Vienna. Before this production the latest one being L´incoronazione di Poppea in the 1060´s. Accordingly, it is not the Vienna State Opera Orchestra in the pit but the baroque specialists Les Musiciens du Louvre effectively conducted by Marc Minkowski.

No, something really happened with Kasarova's voice. You can listen on youtube to parts of her recital in 2005 in Schwetzingen and compare...