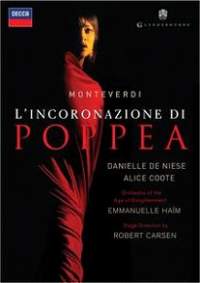 I have always found the libretto to be one of the most impressive features of L´incoronazione di Poppea: Written around 1643, this story of love, desire and power struggle in ancient Rome remains as fresh as anything written today and with a contemporary ring to the many excellently conceived dialogues/monologues. Though the original score does not exist, there is generally agreement that this is  indeed a work by Monteverdi (and not by his students/contemporaries).

It is often discussed whether the morale of this story of Poppea who succeeds with her ruthless schemes and becomes Nero's Empress should be interpreted as a punishment of virtue and/or a victory of love and/or greed. In any case, if you know your Roman history (as Monteverdi no doubt did), the story of Poppea and Nero´s love triumph is indeed hollow, as 1) Nero allegedly kicked Poppea to death a few years later (although disputed by some historians) when she was pregnant with their second child (their first-born died in early childhood) 2) Poppea´s ex-husband Ottone, exiled in the opera, became emperor after the death of Nero (although only for a short while, then he committed suicide) and 3) after passing some time in exile, Nero finally had his ex-wife Ottavia killed.

Robert Carsen explores (again-again) the theatre-within-theatre concept as the main part of the production takes place in front of a velvet dark-red curtain on a naked stage, containing a bed occupied by the various protagonists in turn. Certainly, the production is very elegant, and the opening where the goddess Fortuna kicks out the goddess Virtue from her front-row seat is excellent,  but I still wonder if this spectator-to-ones-own-life concept does not restrict L´Incoronazione di Poppea rather than expand it. The best production I have seen of Poppea still remains DavidMcVicars wonderfully expansive staging, unfortunately not (yet) available on DVD.

Though Alison Coote does not have the masculinity of a Sarah Connelly, she is a convincingly creepy Nero and vocally quite secure. Tamara Mumford is an expressive and elegant Ottavia and Iestyn Davis and Marie Arnet are sufficiently subdued as Ottone/Drusilla. For me, the only real disappointment was Paolo Battaglia, who neither vocally nor dramatically made a real impact as Seneca.

Among the minor roles, the hilarious Wolfgang Ablinger-Sperrhacke (some may remember him as a marvellous Witch in Hänsel and Gretel) stood out as Poppea´s nurse Arnalta.

Emmanuelle Haïm with the strange willowy movements in the pit lead an excellent, vivacious performance with the OAE.

De Niese shaky intonation and shrill? My experience at Glyndebourne in the 2011 L'elisir was just the opposite - the best I've ever heard her. We'll see how she manages Adina this summer, but have you really noticed a downward trend in her voice?

I all the time used to study article in news papers but now as I am a user of internet so from now I am using net for posts, thanks to web.