Bieito and Don Giovanni - which scandal? 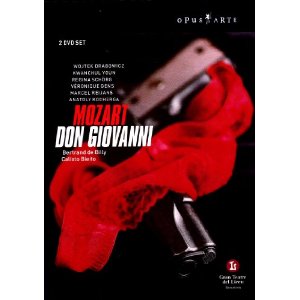 This is the production, which created massive scandal when seen at the English National Opera, London in 2001. However, despite the presence of both urine and oral sex on stage, I was far from shocked and those  frequenting contemporary theater productions (which I rarely do, by the way) will probably feel the same. On the other hand, it will not be to the taste of those preferring a traditional-traditional production - so take a look at it before buying this for your new mother-in-law.. Though I´d recommend everyone to at least take a look as I find this one of the freshest stagings of Don Giovanni that I have seen.

Calixto Bieito has created a production which succeed in creating a real contemporary ambiance, a quite rare achievement in opera.

This Don Giovanni is all about a group of young people living on the edge of society and constantly seeking boundaries. Don Giovanni is quite happy shagging girls in the back of the car, the latest being Donna Anna, quite consensual by the way. And after the murder of her, by the way, aggressive father, Don Ottavio promises her to cover up the entire story in exchange for certain sexual favors. At least this is the impression I get.. In any case Donna Anna is mightily pissed off at Donna Elvira, when she realises that she also has had an affair with Don Giovanni. Donna Elvira, on the other hand, is disgusted when she realises she has performed certain sexual favour to Leporello, believing him to be the Don.

Décors mainly consist of a car park, and a pub with a pool table, background for Masetto and Zerlina´s tasteless party as well.  And the final supper, complete with cheap take-away, rubbish, peeing on the floor, drinking beer from cans – and the Commendatore popping up from the luggage compartment of a car obviously not dead, but almost, as he is killed by Don Giovanni a few minutes later. However, just when I thought Don Giovanni might indeed save his butt, he is murdered by all the other main characters acting together in the final scene, the last stab thrown in by an unwilling Donna Elvira, her hands forced by all the others.

A very contemporary production, all about a restless and alienated young generation. And as such well in accordance with the underlying ideas of the work, from which Bieito essentially does not deviated much. In 2008 in Salzburg Don Giovanni was a heroine addict, but as to the description of youth living on the edge I have never seen a more convincing production than this. The personenregie is exciting and there never was a dull moment.

All the singers act splendidly, however vocally they are not all top-notch.

Best are Véronique Gens as an elegant Donna Elvira and Kwanchul Youn, now a Wagnerian bass, as a splendid Leporello, demonstrating a real comical talent, which he unfortunately does not have so many occasions to show off amidst the many Gurnemanz he performs nowadays.
Wojtek Drabowicz has the right semi-eloquent manners for this Don, but unfortunately not the voice (why not have signed up Simon Keenlyside, who by the way has performed in this production, as the Don for this).
Bertrand de Billy is fast at times too fast for his ensemble, though vastly better than in his later Salzburg performances.

Though, I realise, this will not be to everyone´s taste, in my view it is a completely valid interpretation at least worth to have a look at.
The bottom line (scale of 1-5, 3=average):

It’s very easy to find out any topic on net as compared to books, as I found this post at this site.