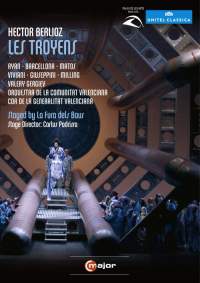 With this production of Les Troyens in Valencia, Fura dels Baus with director Carlus Padrissa has created a visually stunning production, along the same lines as theirprevious Nibelungen Ring, with essentially the same  strenghts and weaknesses.

There is plenty of Star Wars in this production, which ends with Aeneas, himself a visitor from another planet, failing to recognize the paradise which is Carthage, and instead leaves for Mars.

Troy is a dark and doomed place: Skeletons fill the shores, dark threatening clouds and post-war smoking images fill the screen. Additional elements: Barbed wires, an eerie boxing contest, Cassandra being wheeled in an out in wheelchair. The Troyan horse is metallic and menacing. VIRUS ALERT!! pops up on the screen just before the final breakdown.
On the contrary, Carthage an idealised place, modelled upon the particle accelerator in CERN (near Geneva), dominated by large red-and-grey tubes and with images of wind-mills in the background and . A clean society relying on natural energy resources, obviously. However, all may not be that well perhaps: Several uncanny images shows us the human dogs tracing their prey in the Royal Hunt.

The costume designer Chu Uroz dresses most of the characters as ice hockey players or well-padded aliens, thus making the same mistakes he made in the Nibelungen Ring (anyone still remember Brünnhildesbreastplates?) by distancing the characters from any human interaction. Dido simply looks silly with her odd three knot hair style and the lack of interaction between Dido and Aeneas is appalling.

At times, the images are stunning. But the lasting impression is that of a cold production where the ultimate weakness lies in the failure to find a balance between imagery and human interaction.

Perhaps a stronger cast could have carried this staging. However, unfortunately we are presented with weak performances from all three protagonists, worst in fact from Lance Ryan, who is massively overparted as Anaeas, no matter how many excuses one may wish to make for him, well knowing how tough the part is.

Elisabete Matos has heft, but no beauty of tone and is no match for colleagues such as Anna Caterina Antonacci and Eva-Maria Westbroek (not yet on DVD). Daniela Barcellona struggles as well with a vibrato that borders on the offensive, though not as bad as Zlata Bulicheva´s as Anna.

It is far from enough that minor parts are well taken care of with  Stephen Milling and Gabriele Viviani, especially since Valery Gergiev also disappoints in the pit. Though the orchestra seemed to love him and he received a massive ovation, being very much an on-or-off conductor, this was definitely a day off, where he entirely failed to bring out the grandness in Berlioz´ score.