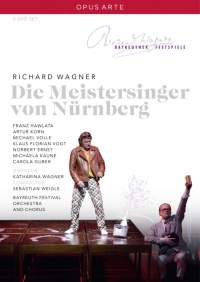 I remember very well this production, the first I saw in the BayreuthFestival house in 2007. Arriving at the last minute, I squeezed into my hard seat on the 25th row followed this spectacle, which had opened a few weeks earlier, to almost universal criticism.

For some reason, Meistersinger normally receives a very traditional treatment even by directors otherwise renowned for inventive staging. Perhaps it was the depart from this “traditionalisation”  that made many criticise Katharina Wagner´s staging? Or perhaps the fact that the succession (to Wolfgang Wagner as Festival Director) at that time was very much debated, and that she, as his grand-daughter was judged as much politically as artistically? I, for one, remember having seen dozens of negative comments related to this staging from people who had not even seen it at the time. Anyway I found at the time, and I still find now, that this staging is more than interesting, and the DVD with the frequent use of close-up, provide myriad of details, which were impossible to notice from the 25th row in the house. Especially the last 45 minutes are quite extraordinary, presenting a daring and entirely novel interpretation:

To truly enjoy this staging you will probably need to accept/agree that this opera is an allegory of changes in society; about how society reacts to change and how much change it can accept:
In Act 1 we are in a 19th century brotherhood of sorts: Traditionally clad “meistersingers” sit around the table, reading small yellow books of German classics. At that time, Sachs, barefoot, is a slightly controversial outsider. But not nearly as controversial as the modern-dress Walther, who sprays paint on everything and everybody. Not a singer, but a painter, the point is driven through, by him assembling a puzzle of Nürnberg all in disorder compared to Beckmessers perfectly assembled Nürnberg puzzle.

The real stuff begins in Act 3: Now Beckmesser is suddenly the outcast with his T-shirt “Beck in Town” and finds himself in Sach´s fancy apartment, where the heads of the old German masters (Brahms etc.) dancing in the background. Sachs, with his elegant suit, is now constructing a neat idealised family-concept literally within the frames of a doll-house for Walther and Eva to be filmed in. How come this sudden change? Then, in the choral scene preceding the “wach auf”, Sachs is captured and tied to a chair by these heads while they, often clad in underwear, perform a weird dance and Eva blindfolded walks amidst them. What is going on here, seriously? Next however, Katharina Wagners master-stroke begin in earnest with an eerie scene in which Sachs´s helpers capture a stage director and conductor, putting them in a coffin, starting the fire to burn them exactly at the “wach auf” in a scene reminiscent of the Nazi epoque. Very strong theater, indeed. Et voila, what comes out of the coffin? A golden calf it seems. When a model of the auditorium emerges from under stage, we the audience are double spectators to Walther bringing home a check of 10.000 from the Nürnberg Bank, while Beckmesser now is an outcast.

The staging requires a familiarity with German culture, both ancient and present, that I perhaps do not have and there are myriads of details to discover here, as the pace is furious, especially in the third act.
To summarize, Sachs and Walther essentially submit to conformism while Beckmesser moves in the other direction.

No, Katharina Wagner does not have all the answers and admittedly the staging of the first act seems a bit heavy-handed. But then again, the first act is really long and not for the first time do I wish Wagner would have lived to revise (read: shorten) it, though I have no idea if he ever thought about that and anyway, if he had lived any longer his next project (after Parsifal) would probably have been a revision of Tannhäuser (needed as well).

More singers stand out on the DVD than I remember from the live performance, especially Franz Hawlata, underpowered in the theater but not here, taking fully advantage of the close-ups for us to see his detailed and impressive acting.
Walther really is a super role for Klaus Florian Vogt, probably his best role together with Lohengrin and Michael Volle also leaves nothing to be desired. As for the rest nobody was exceptional, one way or the other, though admittedly Michaela Kaune was vastly better than the Amanda Mace I saw the year before.

Katharina Wagner presents with the only production on DVD truly departing from medieval Nürnberg and trying to wrestle with this issues. For this alone, this is a must-see.