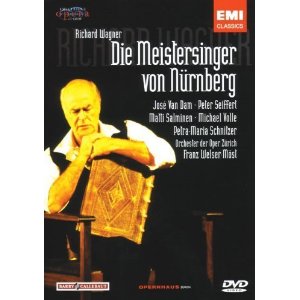 It is not the first time, that otherwise quite inventive stage directors seem to freeze and revert to previous times static theatre when faced with Meistersinger. While it is perhaps not surprising that no-one seems to have truly decoded this piece, why not at least give it a try? Katharina Wagner did, with mixed, but nevertheless interesting results. Nikolaus Lehnhoff, as seen here? Well, suffice to say, we are light years from his production of Tristan and Isolde, to be seen at Glyndebourne around the same time.

Nikolaus Lehnhoff´s style is easily recognizable though; simplistic, geometric sets in stylish colours and characters in period costumes; just take a look at the abstract blue second act with a massive stair-case which could easily have been re-used for his Lohengrin. The best are the equally abstract 3rd act sets, including and excellent amphitheatre excellent ballet.  However, when the answer to the question "what did you learn from this staging regarding the characters and their relationship?" is "nothing", then the raison d´être for this DVD eludes me. Especially as none of the singers were stand-outs either:

Peter Seiffert, sings Walther like Tristan, though not without strain. His real-life wife Petra-Maria Schnitzer is better vocally, though not exactly youthful. Is it really that difficult to cast these two characters? After all this is not Tristan and Isolde.  Also as Magdalene we see the rather mature Brigitte Pinter and while Matti Salminen brings his usual command to Pogner, he is not in optimal vocal shape.  Age notwithstanding, I have seen much better performances from him recently.

José Van Dams strong point is his characterization of Sachs. The voice? Rather too dry, however his strong stage presence and the experience he brings to the role makes up for a lot.

Best of all however: Michael Volle, in a role he repeated in Bayreuth a couple of years later: Vocally strong, always interesting and never ridiculous. A better Beckmesser is not to be seen today.

Finally, Franz Welser-Möst presents a rather swift reading, which is not bad at all, especially as he keeps momentum throughout. However, the competition is stiff, and he does not reach the level of neither Barenboim, Thielemann nor Levine on competing DVDs.