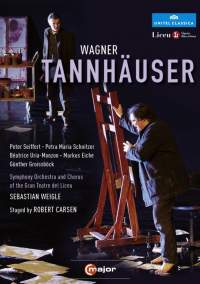 With this production of Tannhäuser, Robert Carsen has created one of his best stagings: Elegant, well thought out as well as thought-provoking. There is only one problem: This was a co-production between the opera houses of Paris and Barcelona. In Paris, the cast including Nina Stemme and Sophie Koch was superb. In Barcelona, less so. And however illogical and unfortunate, the DVD was filmed in Barcelona.


To Robert Carsen, ths opera evolves around an artists struggle with the creative process: Tannhäuser is a painter. We begin in his studio, where he is painting the naked Venus. Multiple copies of Tannhäuser try and paint Venus as well, but all ends in an orgy of nakedness. And is this not the problem perhaps? That nakedness, itself, is not enough to be exciting let alone artistic inspiration? In any case, Tannhäuser completes his painting and in Act 2 finds himself in a modern art gallery. Hermann is the owner. A reception is about to begin. Unsurprisingly, what we see next is a successive revelation of paintings (note that we, the audience only see the reverse side, never what is actually on the painting) during the traditional “Sängerfest”. Shocked by Tannhäusers painting of the naked Venus (presumably, as we never get to see it), he is expelled from the Gallery. During all this, Carsen makes extensive use of the auditorium as both gallery guests as Elisabeth and Tannhäuser enter and exit from between the rows of spectators.

So far, no real interpretative controversy. However this is to come in the third Act, which opens with Elisabeth dreaming about Tannhäuser whilst performing some act of autoeroticism. When the painters/pilgrims return from Rome, their scaffolds are empty, stripped of their paintings. With the antecedents in mind it really is not that surprising that when Tannhäuser finally calls out for Venus, she arrives together with Elisabeth. The two women have merged into one so to say, representing two different but equally essential aspects of womanhood. Thus, when Tannhäuser now reveals his painting (after Elisabeth has touched it)a high-class audience it is recognized as a masterpiece and is assigned a place on the wall in a gallery full of masterpieces – its final place being on the wall just beneath Botticelli´s Venus from Milo. As the painting is turned around just before it is revealed the curtain drops.

The weakness, however, are the singers. In Paris they had Nina Stemme, Sophie Koch and Eva-Maria Westbroek (in a previous run). Here, Beatrice Uria-Monzon looks stunning, just as fine as her Act 1 body-double, but vocally she is shaky and her vibrato is unpleasant.
As for Peter Seiffert, his acting is not too bad, but vocally he is just not very pleasant to listen too. His real-life wife Petra-Maria Schnitzer does better, but there is no bloom in her voice and she is no match for the Paris ladies. Best are Markus Eiche (a substitute for Bo Skovhus) as Wolfram and Günter Groissböck as Hermann.

Weigle is doing fine without being extraordinary, however a Tannhäuser without a real Tannhäuser is a hard sell. As for alternative versions, the idea of Tannhäuser centered around creative struggles is also explored in Kasper Holtens staging from Copenhagen, now available on DVD, but otherwise my recommendation would probably either Alden´s production fromMunich or Lehnhoff´s from Baden-Baden.

Arrival of the guests (Act 2):

Sorry to put this here but I cannot find a link to your review of Königskinder. Have also tried the search box--no luck!

Thanks, I look forward to reading your review.

i'm a big fan of your website....but i can't understand the 5 points for carsens production.....one could see the production today in Austrian TV....and I was totally bored by the staging...the idea of the Artist drama is nice but not for 4 hours.....there should be something more...