Konwitschny Don Carlos or Hey Posa, is that my pizza? 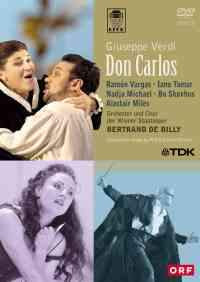 German director Peter Konwitschny´s staging of Don Carlos at the Vienna State Opera is now released on DVD and in short: It´s genuinely recommendable, though long...

Peter Konwitschny´s stagings range from the sublime (Elektra, Tristan, Flying Dutchman) to the weird and incomprehensible (Parsifal, Lohengrin). This Don Carlos definitely borders on the sublime and is clearly based on a very thorough study of the text.

This is the complete original 1867 French version recorded live at the Vienna State Opera in October 2004 with myriads of extra music for those familiar with the shorter Italian versions including the reinstated Act III ballet, here called "Eboli´s Dream", where Eboli and Carlos lives in a bourgeois milieu, a happily married Philip and Elisabeth comes for dinner, and Posa of Posa´s pizza delivers the pizzas..

The concept is very convincing - from the open star-covered space in Act I in which Carlos and Elisabeth first meets, to the confined grey environment in the very minimalistic staging of the following acts. I thought the controversial auto-da-fe, played out between the audience (who had left their seats) and "television reporters" in the foyer of the Vienna State Opera following the arrival of Elisabeth and Philip all the way onto the stage worked brilliantly. I have previously seen this production in the theater and this whole auto-da-fé business, allowing audiences to walk back and forth between the auditorium and the foyer really was quite an experience.

Followed by a well-thought out execution of Philip´s monologue with Eboli lying in his bed and the blind Inquisitor inadvertently stepping on her dress preventing her from leaving the room. Eboli dreams of a future with Carlos, as shown in "Eboli´s Dream", mentioned above. However, in the end she gets murdered by the Inquisition. Posa is both intellectual and near-sighted, always trying to seize whatever possibility comes his way. Surprisingly, the ending is optimistic, with the monk (recognized as Carlos V in disguise as he drops his "crown" on the floor in the first act) rescuing the lovers.

Nadja Michael is a brilliant actress and very beautiful as well. Her voice is huge, however I am slightly bothered with her vibrato in her upper ranges. Ramon Vargas sings beautifully as Carlos, but comes across rather anonymous on stage. So does, unfortunately, Alastair Miles as Philip. Iano Tamar makes a fine Elisabeth, but is no match for Karita Mattila in the Paris Châtelet production. Bo Skovhus convinces as the intellectual (= he wears glasses) Posa. All accompanied by the brilliant chorus and orchestra conducted by Bertrand de Billy.

This is the only alternative to the Paris Châtelet production for a French Don Carlos on DVD, and in terms of staging, the more innovative of the two. The casting of the Châtelet production has a slight edge, particular regarding Karita Mattila´s Queen and José Van Dam´s King. But both these versions, in my opinion, are vastly more interesting than the Italian versions available on DVD, which is somewhat unfortunate for those who, like me, prefer the Italian Don Carlo.

The auto-da-fe as it has never looked before:
The bottom line (scale of 1-5, 3=average):

I infinitely prefer the Chatelet production, both musically and dramatically. I actually prefer the French version, especially the inclusion of what became the Lacrimosa (Carlos, Philip and male chorus after Posa's death).
I wasn't keen on the auto-da-fe scene, I thought it was a bit heavy-handed, esp. the projection of images from the Warsaw Ghetto at the end - I THINK I MIGHT HAVE GOT THE POINT WITHOUT THAT!! And I hated Eboli's Dream - wanting to use the ballet music is fine, but do you think Princess Eboli would really have had such a drab, suburban fantasy?
And Bo Skovhus bawled the Death Scene in an undifferentiated FORTE, which confirmed me in my preference for Thomas Hampson.

I definitely agree with you on the Lacrymosa inclusion, which is marvellous in the french version, but may also be heard in Italian. In the Italian 4-act version, which opened in Copenhagen last November, the Lacrymosa duet was included.
I actually quite liked both Eboli´s dream and the auto-da-fe. As it looks like I´ll be in Vienna in June, I´ll probably go and see it live at the Vienna State Opera. I´d be curious how this works out for the people actually in the audience..