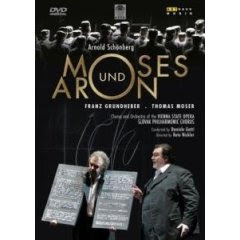 This is the first DVD version of Schönberg´s Moses and Aron, recorded at the Vienna State Opera in 2006.
Reto Nickler was brought in as a last-minute substitute for Willy Decker, at a point where the set decorations had already been made, and succeeds in communicating the basic conflict of the opera: The "pure faith" (represented by Moses´ sprechgesang) vs. the essential "communication" to convince the people (represented by Aron´s placid tenor lines).

Superbly acted and sung performances as both Moses by Franz Grundheber, and Thomas Moser in the tremendously difficult part as Aron. Clear and precisely conducted by Daniele Gatti. I find it difficult to imagine a better performance of this work.

And as an addition, there is a 45 minute interview with the protagonists, including Franz Grundheber reading from the third act, which Schönberg never put to music, in which Moses finally triumphs over Aron , as opposed to the opera´s ending, where Moses is the the loser.