Glyndebourne Tristan on DVD: Brilliant orchestra in a static production with superb singing mainly from Pape and Skovhus 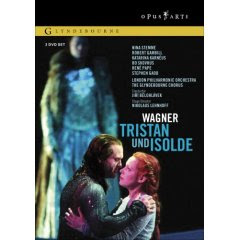 Nikolaus Lehnhoff´s production of Tristan and Isolde, seen for the first time in Glyndebourne 2003 and revived 2007, is both beautiful and aesthetic. A (semi)-abstract staging, it is set on and around a semicircular womb-like set of rings on a backdrop of changing colours within the blue-white-red color spectre on which the characters move slowly around.

In theory, an excellent backdrop for a meditative approach aiming to expose the inner roots of this work. However, I was left with an impression of a static piece as opposed to a flowing and dynamic one and the concept provided me with no insights into the characters motivations or actions. Dynamic interaction or exploration into the motivations of the characters clearly is not high on Lehnhoff´s agenda. Compared what Patrice Chéreau may achieve with the piece, one cannot help feeling disappointed with Lehnhoff.

Swedish soprano Nina Stemme made her debut as Isolde when this production was new in 2003 to major international acclaim. And she is indeed a fine Isolde, both warmly sung and finely characterized, both vocally and dramatically. However, a shrill quick vibrato mares the upper mid-range of her voice, becoming increasingly disturbing under pressure, which prevents me from fully enjoying her interpretation. And though a fine actress, I miss a certain capacity to go over the edge. Nevertheless, Nina Stemme sings the part well and is vastly superior to 99,9% of the Isoldes on the circuit today, that is : Everyone except Waltraud Meier. Something you unfortunately cannot say of Robert Gambill, who simply disappoints as Tristan, both vocally and dramatically, even without expecting anything like a Melchior-level performance.

The real highlights are René Pape´s marvellous King Marke followed by Bo Skovhus´ fine Kurwenal, who also succeeds in appearing alive in this production as opposed most of the other protagonists, René Pape excepted. Katerina Karneus made a fine Brangäne as well, with a firm and round voice.

And then the magnificent playinh from the London Philharmonic Orchestra superbly conducted by Jiří Bělohlávek. Rarely have I heard such inspired and magnetic orchestra playing in this repertoire, especially from a non-Germanic orchestra. I am embarrassed to admit to my limited knowledge of the London Philharmonic Orchestra. Jiří Bělohlávek made the music flow, had attention to detail without being tedious and succeeded in creating the long lines, making the piece come alive.

A 60-second highlights of the DVD may be seen here: