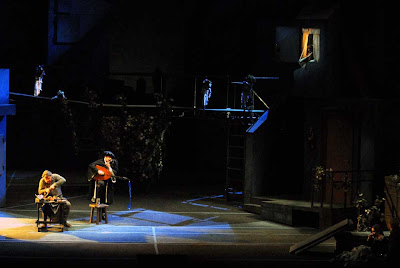 You only needed to hear 3 bars of the prelude to realize, that this was going to be a musically excellent performance. Conducted by Peter Schneider, the orchestra played up to their best. And in this notoriously difficult piece as well..In fact, it´s not that difficult to get through, but to Schneider´s reading is not as light-hearted brilliant as Thielemann or as dramatic as Barenboim, but falls somewhere between these two categories and he more than holds his own here.

The production is Götz Friedrich´s old one from 1993, also available on DVD. While it probably doesn´t offend anyone, neither does it excite, being equally boring on DVD vs. in the house.
Lenus Carlson (singing Kothner) was the only member performing this evening of the original cast of 1993 and according to an interview, the cast rehearsed with Friedrich 6 hours a day for two months before that premiere. "Don´t give me that Juillard-shit" - Götz Friedrich apparently told Carlson, whenever he did something that didn´t please him, which according to Carlson did not happen very often, though.

Robert Holl is a rather good Hans Sachs. Not under real pressure at any point and holding his way throughout. Also fine singing from Stig Andersen as Walther as well as Markus Brück´s both funny and well-sung Beckmesser and Michaela Kaune´s almost ideal Eva, whom all received major applause from the audience.

I found Deutsche Oper boring, but only went to two performances there. The building amuses me, the inside especially has a dusty feel.

Completely agree. Particularly in the auditorium the "dust" becomes noticeable...I suppose it´s neither modern nor old enough to be interesting.