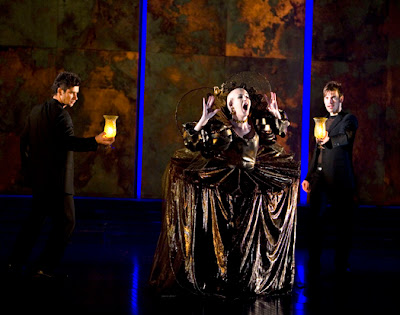 L´Incoronazione di Poppea opened last month as the first baroque opera to be staged at the new waterfront Copenhagen Opera House, as opposed to the baroque-stage The Old Stage. It scored a major success with both audiences and critics alike resulting in a sold-out run of performances.

First of all, it is a stilistically elegant and very aesthetic production. Simple set designs of a spare blue/metallic backgound with a leopard-skin covered sofa serving as the only decoration. David McVicar succeeds in bringing the figures alive and infuses drama into the piece, which at times also is very very funny, especially in the scenes involving mezzo-soprano Susanne Resmark showing off her major comic talent as Nero´s wife Ottavia´s old maid Nutrice and tenor Gert Henning-Jensen (Poppea´s maid Arnalta - here depicted as a drag-queen).

There is more than a hint of decadence to David McVicar´s concept, showing a cocaine-sniffing, unsympathetic Nero (fabulously sung and acted by Tuva Semmingsen), who looks (and acts) suspiciously like Prince (the rock-singer). McVicar´s twist of placing the Act II discussion of the philosophers´ in a TV-studio makes exceptional sense and clearly contributes to showing the timelessness of this 400-year old piece. Those familiar with previous David McVicar stagings such as Rigoletto, Manon, Salome, Nozze di Figaro or Giulio Cesare will know that this examination of a civilization in decay is a central theme of David McVicar´s work. Nevertheless this Poppea counts among his finest works.

The brilliantly sung Poppea by Ylva Kihlberg clearly does not love Nero (why would she?) - she is focused only on becoming an Empress, in which she of course succeeds. Sine Bundgaard sang beautifully as Drusilla (the new lover of Poppea´s ex-husband), one of the few genuinely sympathetic characters. Trine Bastrup Møller was very funny as well as in good voice as Valletto/Amor. A close to ideal casting of this opera.

Excellent performance in the pit from the period ensemble Concerto Copenhagen conducted by the tireless Lars Ulrik Mortensen from the cembalo. Their enthusiasm for this music was clearly communicated to the audience, without doubt a key factor to the success of this production.
In short a performance of the highest international class and another reminder that the times in which the Royal Danish Opera was a back-water company are over. 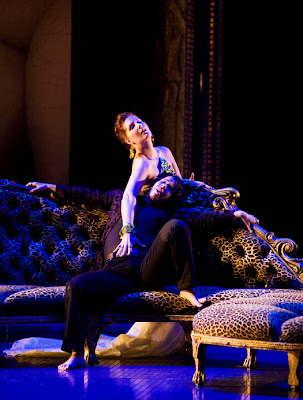 How can you review this opera without mentioning Seneca??????