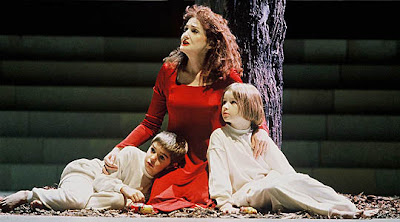 As Norma from the Berlin State Opera
Inga Nielsen, the most distinguished Danish soprano of the recent 50 years, died yesterday in Copenhagen.

Inga Nielsen grew up in the United States, and started out in the lyric coloratura soprano repertoire, working her way up in the 1970´s through various German opera houses. Highlights from this part of her career includes Konstanze (Die Entführung aus dem Serail ) in both Salzburg and at Covent Garden with Georg Solti. She was also a flower-maiden in Karajan´s Parsifal recording.

Inga Nielsen sings "Marter aller arten" - from The Abduction from the Seraglio, Salzburg 1988:

My first meeting with Inga Nielsen took place around 1985 - I was 13 and played in a local youth orchestra. She was scheduled to sing Vier letzte lieder with us at the local Town Hall in Gentofte, where she impressed everyone with her pleasant and friendly manners as well as her beautiful singing.

The immediate quality of Inga Nielsen´s voice is the freshness and clarity. In the 1990´s she made a highly successful switch from the lyric to the lyric-dramatic/dramatic repertoire and managed to preserve that exact freshness despite both a heavy repertoire and heavy singing schedule. 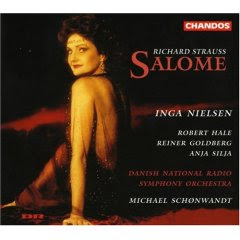 I vividly remember her visiting Copenhagen as an eerily moving and crystal-clear on-pitch Salome, a part she also recorded on a highly acclaimed CD conducted by Michael Schönwandt with her husband Robert Hale as Jochanaan. The photographs of her Salome (and her Norma) are still on display in the foyer of the Berlin State Opera.

Unfortunately I never heard her as The Empress (Frau Ohne Schatten), a part she sang to major acclaim in several major houses including Vienna and Los Angeles. Other major successes in the later years included Chrysothemis, Tosca, Norma as well as Schönberg´s Erwartung and especially Elsa (Lohengrin) a part I heard her sing in Peter Konwitschny´s staging in Hamburg. It was in this role she made her last performance at the Royal Danish Opera last year.

Recently a superb CD with highlights from her 50+-years recording career has been issued, which displays Inga Nielsens incredible versatility ranging from Marguerite in Faust to Richard Wagner. Strongly recommended.

We have lost a unique voice and musical personality. May she rest in peace.

Inga Nielsen and Plácido Domingo in the St Sulpice duet from Manon:

Inga recently worked with Chandos to put together a very personal tribute to her opera career. Inga did not share her illness with us, but we all realised that this project was one of great importance to her. The result was a 2-CD set (CHAN 10444(2)) spanning a period of more than fifty years, from her first ever recording, made at the age of six accompanied by her father, all the way through to the latest recordings made in August 2006 and April 2007. It now will be a poignant reminder of her career, and of a lady who will be sadly missed.

I' m shocked....i had no idea she had health problems.