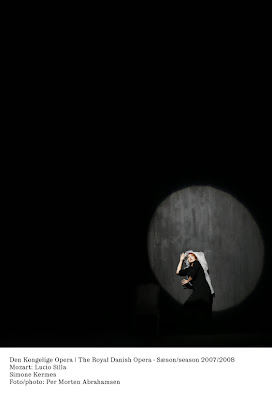 Lucio Silla is Mozart´s 7th opera, 2,5 hours long and written when he was 16 years old. I believe this statement sums up why anybody would even think of staging this opera today: From a musicologists viewpoint the early Mozart is mainly interesting in that is points forward to the late and from an isolated musical and dramatical viewpoint, few will disagree that an individual masterpiece is is not. This season saw the Danish premiere of Lucio Silla at The Old Stage (as opposed to the new Copenhagen Opera House) of the Royal Danish Opera.

German director Christof Loy, a specialist in Mozart and baroque opera including an excellent Alcina in Munich last season, succeeds in peeling the layers off Lucia Silla leaving the essentials behind: A powerful man loves a woman, who doesn´t love him and the man she does love tries to kill the powerful man, who in the end forgives them all in a Sarastro-like manner. Musically the arrow pointing to Don Giovanni is obvious in several of the orchestral fragments, the recitatives are generally interesting, but the arias, for most part, seem to be lacking in variation. But again, any other 16 year old who could even match this?

And why does this take 2,5 hours: Mainly because the main characters sing several arias each on the same subject before moving along.The work could easily have been shortened by 50% without loosing any dramatic elements.

Much praise to Christof Loy for making this (almost) not boring, a success mainly due to the convincing dramatic interaction between the main characters. The sets are simple and very aesthetic held mainly in black-and-white, the time of the action is unspecified, though the characters are wearing suits.

Michael Kristensen convinces as Lucio Silla, the Sarastro-look-alike, in the end alone in the spotlight, left by all. Also a fine performance from Susanne Elmark as his sister, a very pleasant lyric soprano and elegant stage manners. Chilean mezzo Mariselle Martinez was Cecilio, German soprano Simone Kermes his beloved Giunia and Agneta Eichenholz his fried Cinna, all fine. The Royal Opera Orchestra was effectively conducted by Andreas Stoehr.

But most of all Christoph Loy is to be congratulated with successfully making this Roman music drama debatable quality work. 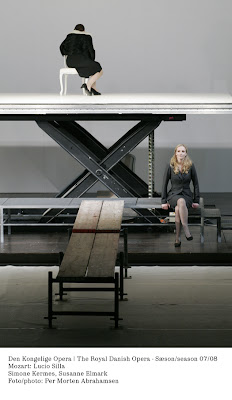