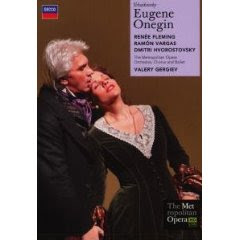 This is without doubt the most exciting performance I have seen from the Metropolitan Opera, in addition to being one of the best operatic DVDs ever to have been issued.
Robert Carsen´s simplistic sets provide the ideal background for a production with the focus on Dmitri Hvorostovsky´s marvellous Eugene Onegin. He is simply the Eugene Onegin of the century: Ideal in both physical appearance and voice: The haughty manners, perfectly smooth legato lines combined with superb acting, way above his usual standard, perhaps influenced by Renée Fleming´s moving Tatiana. They have superb chemistry on stage and the final scene is simply unforgettable. Also a fine though slightly dry performance from Ramón Vargas as Lenski.
Where I would have expected Valery Gergiev to sparkle in the pit, I rather found him slightly hollow, in what approached an off-night by his own standards.

They bring this story alive in one of the most searing operatic performances I have ever witnessed. Helped by Pusjkin´s great and eternally relevant story of love and rejection.

My only complaint is that this is spread out on 2 discs, while it could very well have fitted into one.

Initially I though, this would be the undisputed best DVD version of Eugene Onegin for years to come. However, merely a couple of months later, the dark, brooding 2007 Salzburg production conducted by Daniel Barenboim emerged, meaning that two of the best operatic DVDs on the entire operatic DVD market are 2007 productions of Eugene Onegin. And yes, Barenboim does beat out Gergiev in musical depth. And Peter Mattei is the equal of Dmitri Hvorostovsky. Both versions are essential viewing.

Renée Fleming and Dmitri Hvorostovsky in the final scene:
The bottom line (scale of 1-5, 3=average):

I totally agree with your review of this dvd. I was this in the house last spring, and went to the encore HD transmission, and was thrilled that this was one of the trasmissions the Met decided to issue. I bought it immediately, and thoroughly enjoyed watching it as soon as it came. I am a fan of both Fleming and Hvorostovsky, and have seen them both several times, but this performance is magical! I also love the production, which I had not seen before - having it begin and end with Onegin in the chair was a great idea. This is my favorite Tchaikovsky opera. I have seen 4 different productions, and liked them all, but this is the best. Good for the Met for doing it with this cast and sharing it with all of us!

I have to add a coment here! This DVD is absolutely fascinating. I agreed with you in every comment you made! And for me it seems even more striking, after seen the Onegin performance at the Berlin Staatsoper, last september. Though I think the German version had a better Gremin (Pape) and Lenski (Villazon), not to mention the amazing sound of the orchestra/conducter (Baremboim), the Fleming/Hvorostovsky duo is breath-taking! Since the first time I've watched it, I became obsessed with the last scene, which is IMO how opera should be played/acted! Marvellous, unforgettable!