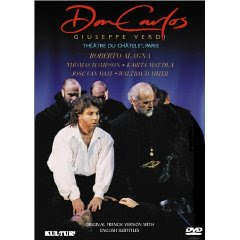 Luc Bondy is the director of this very elegant and stylish Don Carlos production, recorded live at the Châtelet Opera, Paris in 1996. The sets are simple, no attempts at showing "contemporary relevance" in the dressing, and following the libretto more or less closely. Here, Elisabeth is sleeping in Philip´s bed during the monologue - in Konwitschny´s Vienna production Eboli sleeps there. And Don Carlos is saved at last as well. Perhaps the highlight of this production is the very beautiful "lacrymosa" scene (later to be incorporated into the Requiem) in which Philip and Carlos lament the death of Posa.

A starry cast was assembled for this production lead by the superb Karita Mattila as Elisabeth and the equally fine Waltraud Meier as Eboli both with plenty of stage charisma as well as brilliant singing. It´s often been said that Waltraud Meier does not fit in well with this sort of repertoire, but here she seems more than fine. Together with Karita Mattila´s Act 5 aria, she got the biggest applause after the "Don Fatale" aria.

While Thomas Hampson was a rather anonymous Posa (why does he need to have such long hair?), José Van Dam was good, although a bit dry-voiced as Philip and dramatically very convincing. Eric Halfvarson´s Inquisitor scrambled around the floor and while rather flat vocally, he was a genuinely menacing dramatic presence. And finally Roberto Alagna... there is something very sleek about both his presence and singing here that frankly irritates me. But not the audience judged by the raptuous reception he got. Fine performance also from the orchestra conducted by Antonio Pappano.

In short, musically this performance is superior to the Konwitschny staging from Vienna, although the latter may boast of a more imaginative staging.

As you mentioned, it's not as if the choice is wide for the French Don Carlos, although it's the original version of this opera (and I think the 4-act Italian version lacks something). In that context, Alagna is an honorable choice.

Hampson's singing shines in one scene, his duet with Carlos when he urges him to go to Flandre.

I loved Hampson's performance in this - did you not think he was superb in the death scene? And passionate in the confrontation with Philip - I agree with your high opinion of Jose van Dam.

The thing is, I´ve never really focused on Posa´s death scene in this opera, which I find too sentimental. So I haven´t particularly focused on Thomas Hampson´s performance here, but yes, he definitely was good, I just thought he looked rather stupid (mainly by fault of his long hair, I suppose).

I've seen this on Mezzo years ago, and Halfvarson is still my favourite Inquisitor. He looked really fanatic, almost non-human, a complete monster. And his voice is huge - heard him live as Gurnemanz, just a few month ago. I loved the freshness of this production - and the lack of those stupid ruffled collars. Finally the women looked elegant. Also, Waltraud Meier is a superb Eboli - I was surprised to hear a Wagnerian in this role, and she worked out perfectly.
Hampson is a good Posa, just... that AWFUL wig. *sigh* And he has a certain chemistry with Alagna. (chemistry equals subtext)