Who is Ian Storey? 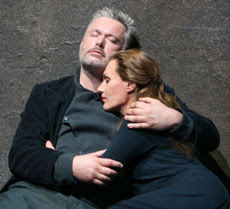 Interview in The Guardian today with the British ex-Furniture Designer now Wagnerian heldentenor Ian Storey who will make his debut this Friday in the Chéreau/Barenboim Tristan and Isolde opening the La Scala season.

Storey arrived in Milan this spring to rehearse the role of Steva in Janácek's Jenufa. He discovered that La Scala had a problem: with eight months to go before the prestigious Wagner season opener, their chosen tenor had withdrawn. They were looking for alternatives. Might Storey be willing to fly to Berlin to sing for Barenboim?

Barenboim told Storey that a singer normally needs a year to learn the role, which is one of the most demanding in the repertoire. "He said to me, 'Look, you have five months before we start rehearsals.' And then he said to La Scala, 'Give him whatever he needs, an apartment, whatever. Because we have to get him ready.' Since then I've worked with James Vaughan from their music staff almost every day - nine or 10 hours a day as the rehearsal period got nearer. Since the start of April, I've only been home for four days. I've hardly seen my wife. "

Incredibly, Storey has never seen a performance of Tristan und Isolde. "I don't think I could sit still for long enough," he says.
Posted by mostly opera... at 20:12

Here some comments - frightening indeed - on Storey, from LaScala’s “loggionisti” (opera fans normally sitting in the 2 upper balconies of the Piermarini’s theater) who have listened his reharsals these days:

- Storey is like AIDS, if you know him, you avoid him!
- Heard Storey? His voice is trembling and his timber is ugly, horribly ugly;
- Storey lacks grip and stability: he seems totally inadequate for this role;
- Storey as Tristan at LaScala: what a shame!
- Storey has a pockey class;
- A “disturbing” Storey;
- The worst we could have for a premiére;
- Who brings tomatos and vegetables to throw to Storey?
- Just one word: aberrant!
- I had already the misfortune to listen to him;
- Storey is really in a bad shape.

Hopefully wrong, or influenced by the italian “bel canto” attitude...

Thanks for this! Excellent link. I wonder who the originally hired tenor for Tristan was (my guess would be Seiffert since Barenboim is hiring, but it doesn´t make sense he would cancel..)

A well informed “loggionista” says that the original Tristan tenor engaged for LaScala was another Barenboim’s partner: Burkhardt Fritz (he would be anyway at his debut as Tristan...).

The news was long ago in Fritz’s website, from where is has obviously been removed.

The reason for the cancellation remains however undisclosed.

That makes sense. And in that case it is no great loss. Believe me, nobody would be exstatic about Burkhard Fritz´ Tristan (I know him quite well from Berlin)..At least Ian Storey looks alright for the part...

Hei:
It is impossible today to Burkhardt Fritz can sing Tristan, after hearing this summer at the Salzburg Cellini.
For the loggioni, everybody knows them. Better wait to hear the Tristan und Isolde by the channel ARTE.
Best regards

The main reharsal of yesterday was very well received by the press and critique in general.

Also “loggionisti” seem to have smoothed their roughness towards Storey (but even Meier has strong opponents... in favor of Nina Stemme).

I was lucky enough to attend the pregeneral rehearsal of Tristan last Saturday in Milan. All of the negative reports about Ian Storey's singing are so misinformed it is incredible. I have NEVEr heard Tristan sung as beautifully and (seemingly) effortlessly like Storey. He sang it with musicality, class and intelligence and sounded as fresh at the end of Act 3 as he did at the beginning of the opera. It was truly incredible.

Perhaps the loggionisti simply dislike him because he is an Englishman? If this is the case, and they are able to come up with an Italian Tristan that is better (good luck finsing a Tristan from ANY country who is better) then I'd like to see it.

Or perhaps one of these people would like to stop criticizing and perhaps have a go at it themselves? In which case, I'll be bringing the tomatoes!!!

Heard him yesterday through the Radio, I had no main problem with his singing. He's not a Windgassen, not even a Kollo, but goes. (In the pause we heard old Hungarian Wagner Tenors singing Tristan: Zoltán Závodszky was fantastic!