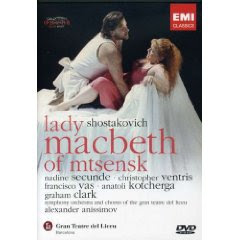 After having seen the only alternative Lady Macbeth of Mtsensk DVD on the market, the superb Martin Kusej- production from Amsterdam, it is hard to be overly enthusiastic about this Barcelona production. Though this was the first on the market, and the first one I saw as well.

Stein Winges approach is rather traditional and semi-realistic set on a spartan stage, the main focus being on the relationship between Katerina and Sergei on a pure human level.
Does it work? As such, it is not too bad. However, it fails to explore the depths of the score. As does conductor Alexander Anissimov: It may be unfair to compare him to Mariss Jansons mighty Concertgebouw, however this is what he is competing against.

Nadine Secunde gives her all in a convincing portrait of a not overly sympathetic Katerina, though she quite audibly is past her prime. Smashing performance, however from Christopher Ventris as a roughly attractive Sergei, also to be seen in the Amsterdam DVD.

Those not in favour of Martin Kusej´s more abstract interpretation may prefer Stein Winge. However, I cannot imagine anyone to favour Anissimov to Mariss Jansons. And after all, Lady Macbeth is as much a conductors opera than anyone elses.